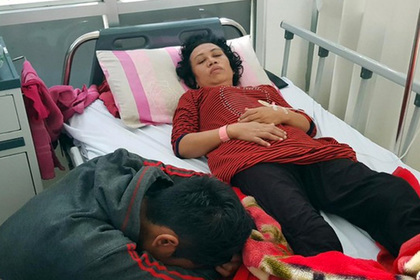 In Indonesia, found a woman who disappeared into the sea a year and a half ago. She was alive and dressed in the same clothes she had been seen for the last time. This was reported by the local newspaper Dudung Pret.

In early 2017, 52-year-old Nining Sunarsih (Nining Sunarsih) was vacationing near the city of Sukabumi on the island of Java. Eyewitnesses claimed that from the beach it was washed away in the sea by a giant wave. The woman screamed and called for help, but no one dared to go into the water because of a violent storm. Rescuers for a long time could not find Sunarsih.

A week later in the Sukabumi area, the body of an unknown person was discovered, but the examination showed that it belongs to a woman who has not been lost. After several more weeks of unsuccessful searches, the local authorities curtailed the rescue operation and declared Sunarsih dead.

The family refused to recognize the death of Indonesians. At the end of June, her uncle, according to his stories, had a dream that Sunarsih is waiting for relatives on one of the beaches near the place of loss. When the dream was repeated several times, he told him about the family, and they went to the beach on June 30, but the search was unsuccessful. However, on the morning of the next day the relatives returned to the place of the loss and found Sunarsih unconscious. She was wearing the same clothes on the day of disappearance.

The family took the woman to the hospital. Doctors noted the deplorable state of Indonesian, but assured that she would soon recover.

The head of the rescue service of the city of Sukabumi, Aulia Solihanto (Aulia Solihanto) confirmed the reliability of the history to the information portal CNN Indonesia. At the moment, the incident is being investigated, but it is likely that circumstances will be able to be clarified only after the rescued woman can talk.