The famous Tsavo ogre lions, who killed over 130 railway workers in Kenya in the early 20th century, killed people not because of a lack of food, but for the sake of pleasure or because of the simplicity of hunting for humans, say paleontologists.

“It seems that hunting for humans was not a measure of the last salvation for lions, it just made life easier for them.” Our data show that these animal-eating lions did not fully eat the carcasses of the animals and people they caught. It seems that people simply served as a pleasant addition to Their an already varied diet, in turn, anthropological evidence indicates that people in Tsavo were not only lions eating, but also leopards and other big cats, “says Larisa DeSantis of Vanderbilt University in Nashville, USA.

The Dark Heart of Africa

This story dates back to 1898, when the British colonial authorities decided to join their colonies in eastern Africa by a giant railway stretching along the shores of the Indian Ocean. In March, its builders brought to Africa by Indian workers and their white “Sahibs” faced another natural obstacle – the Tsavo River, the bridge through which they built the next nine months.

Throughout this time, the railwaymen were terrorized by a pair of local lions, whose courage and audacity often came to the point that they literally pulled workers out of their tents and ate them alive on the edge of the camp. The first attempts to frighten off predators by fire and barbed shrubberies failed, and they continued to attack the expedition members. 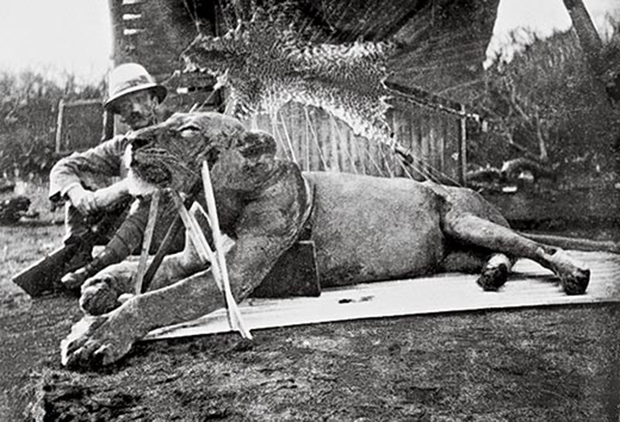 Lion-eater from Tsavo and Colonel Patterson

As a result, the workers began to mass desert out of the camp, which compelled the British to organize a hunt for “Tsavo killers.” The cannibalized lions were unexpectedly cunning and elusive prey for John Patterson, colonel of the imperial army and expedition leader, and only in the beginning of December 1898 he managed to lie in wait and shoot one of the two lions, and in 20 days kill the second predator.

During this time, the lions managed to break the lives of 137 workers and British servicemen, which led many naturalists of that time and modern scientists to discuss the reasons for such behavior. Lions, and especially males, at that time were considered quite cowardly predators, not attacking humans and large cats in the presence of retreat paths and other sources of food.

According to DeSantis, such ideas forced most researchers to assume that lions attacked workers because of hunger-in favor of this was the fact that the local livestock of herbivores was greatly reduced because of the plague epidemic and a series of fires. DeSantis and her colleague Bruce Patterson, the namesake of a colonel from the Chicago Field History Museum, where the remains of lions are stored, have been trying for 10 years to prove that this was not the case.

Safari for the “king of beasts”

Initially, Patterson believed that the lions hunted people not because of a lack of food, but because their fangs were broken. This idea was met with a flurry of criticism from the scientific community, as Colonel Patterson himself noted that the canine of one lion broke on the barrel of his rifle at the moment when the animal ambushed and jumped on it. Nevertheless, Patterson and DeSantis continued studying the teeth of the “Tsavo killers” using modern paleontological methods.

The enamel of the teeth of all animals, as scientists explain, is covered with a peculiar “pattern” of microscopic scratches and cracks. The shape and size of these scratches, and the way they are distributed, depends directly on the type of food that their owner ate. Accordingly, if the lions were starving, then their teeth should be left with traces of gnawed bones that the predators were forced to eat with a lack of food.

Guided by this idea, paleontologists compared the drawings of scratches on the enamel of lions from Tsavo with the teeth of ordinary lions from the zoo fed with soft food, hyenas that eat carrion and bones, and the man-eating lion from Mfuwe in Zambia, who killed at least six local residents in 1991 .

“Despite the fact that eyewitnesses often reported” bone crunching “at the outskirts of the camp, we did not find traces of enamel damage on the teeth of Tsavo lions, characteristic for eating bones. Moreover, the scratching pattern on their teeth is most similar to the one , Which is on the teeth of lions in zoos, which are fed beef tenderloin or pieces of horse meat, “- says DeSantis. 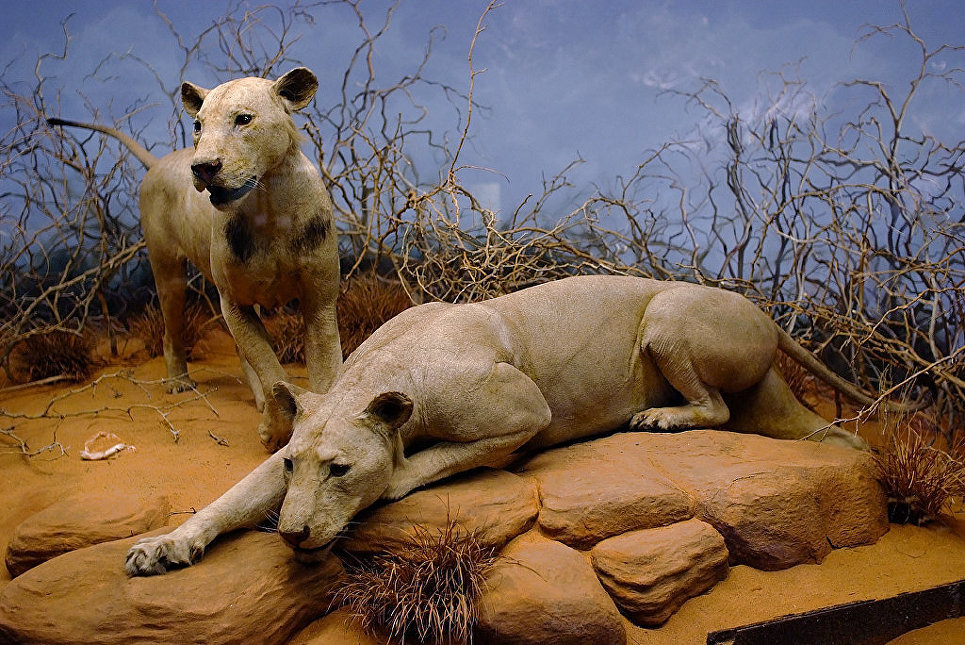 Lions-cannibals from Tsavo, reproduction in the Field Museum of Natural History in Chicago

Accordingly, we can say that these lions did not suffer from hunger and hunted people for no reason for gastronomic reasons. Scientists suggest that the lions simply liked the fairly large and easy prey, for the capture of which it took much less effort than hunting zebras or cattle.

According to Patterson, such conclusions are partly in favor of his old theory about dental problems in lions – in order to kill a man, the lion did not necessarily have to bite his neck artery, which was problematic to do without fangs or with aching teeth when hunting large herbivores Animals. Similar problems with teeth and jaws, he said, had a lion from Mfuwe. Therefore, we can expect that the controversy surrounding the cannibals from Tsave will flare up with renewed vigor.