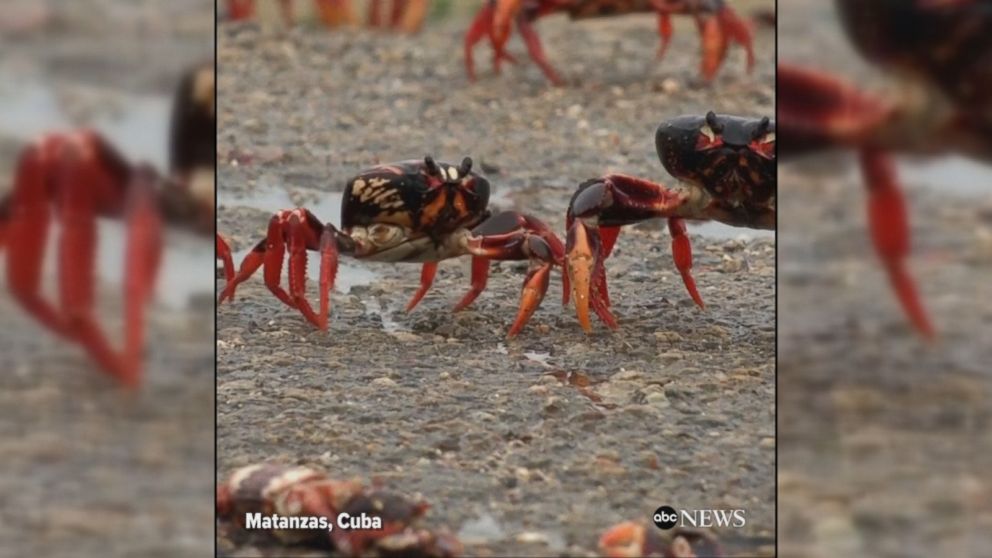 It happened again. Bay of Pigs in Cuba captured. But this time not enemies of Fidel Castro, but millions of red, yellow and black land crabs.

Every year after the first spring rains the crabs march from the surrounding forests in the direction of the bay on the south coast of Cuba in order to mow eggs in the sea, and demolish everything on their way.

They appear at dawn and dusk, flooding the paths leading to the sea, climbing to the walls of houses and covering the coastal zone with a carpet. The stench of corpses crabs, which trampled their relatives, fills the air, and their sharp fragments of the shells of the dead pierce car tires. The machines are speeding up, some are folded to avoid collision with decapod crustaceans, fragments of shells whistling through the air …

Fortunately, this does not threaten the survival of two prolific species of Gecarcinus ruricola and Gecarcinus lateralis, which live not only in Cuba.

Similar migrations of crabs occur in other parts of Cuba at the same time of year and in some other ecosystems, for example – on Christmas Island in Australia.

After the Bay of Pigs, adult crabs return to the forest holes, laying a lot of eggs. And after a couple of months they are joined by baby crabs that hatch into the sea.

For the local people, the invasion of crabs is good business. Tourists will happily pay $ 10 for tire repairs. The average salary in Cuba is about $ 25 per month, Telegraf reports.