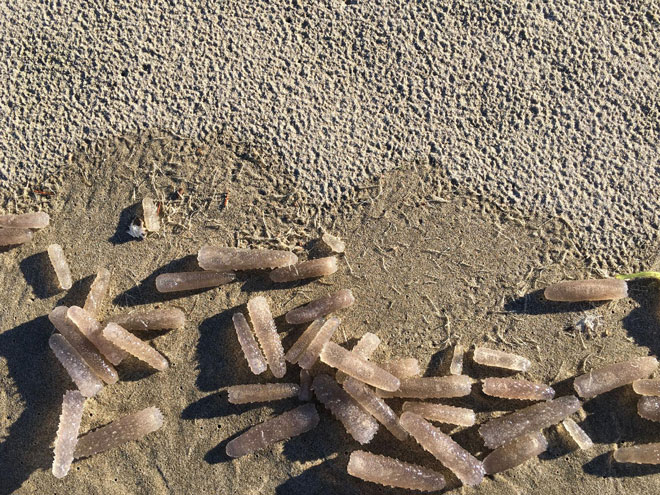 After three years of extremely warm water along the western coast of the USA in 2017, it finally cooled down, and the marine world seemed to return to normal life … But suddenly they appeared.

Since the spring, millions of bizarre bioluminescent beings resembling tubes have become adhering to networks and filling beaches along the West Coast. These rough jelly-like animals, called fireballs or pyrosomes, are cone-shaped shells. They usually live in the tropics, but this spring gathered in the eastern Pacific Ocean in unprecedented numbers, spreading from Oregon to the Gulf of Alaska.

“It’s really strange,” says Jennifer Fisher, a faculty member at the University of Oregon in Hatfield. “I’ve never seen anything like it.”

“It’s incredible how many of them!” – exclaims his colleague Rick Broder, for 30 years studying various jelly-like creatures in the north-west of the Pacific Ocean.

In one research network, in five minutes, 60,000 piros were collected. Fishermen near Sitka refused to fish, because they could not remove tubular organisms from hooks. They filled the thickness of the water for several tens of meters. But no one knows why.

As a rule, pyrosomes are so rare that some scientists have not even heard of them. What will be the consequences of such an invasion, experts are not yet going to say, but are sure that this will affect the ecology of the ocean. For example, when all this mass of pyrosomes begins to die, their decaying bodies can take a huge amount of oxygen from the coastal seas, jeopardizing the rest of the marine life.

Usually they are found in places such as Ivory Coast, the Mediterranean Sea or the waters of Australia and Florida. Some specimens can reach a length of 60 cm or more. Pyrosomes are strong, like cucumbers, and covered with tiny bumps. To move up and down in the water column, they use small hairs.

In 2014 and 2015, when the thermal bubble temporarily transformed the eastern part of the Pacific Ocean, animals from different regions began to appear where they had never been before. Inhabitants in warm waters, sharks and tuna, were caught in Alaska. Tropical sea snakes crawled near California. And a handful of piros began to be washed ashore.
Then the temperature began to fall, and everything seemed to return to normal, but suddenly these creatures began to multiply actively, flooding the sea and land on the West Coast and especially in Alaska by spring. Scientists can not explain how and why it happened. “These guys probably consume a lot of food. As a rule, they eat small particles, but they have to eat a lot to achieve this density, “says Broder.

Whether they themselves serve as food for someone is also unclear. Scientists found several in the belly of the fish, but she ate them of her own free will or accidentally, when she got into the crowd of luminous aliens, it remains to be wondering.