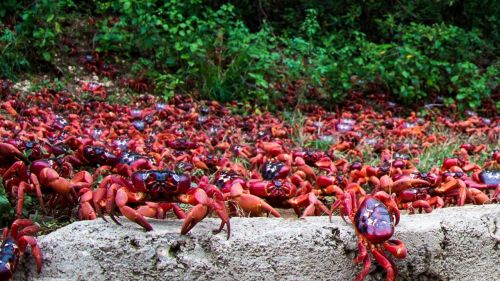 Christmas Island in the Indian Ocean which is the external territory of Australia at the end of December literally is attacked by millions of red crabs. They migrate from the woods in the central part on the coast, noting thus the beginning of a season of manifolding. Migration happens annually and about 18 days last. At this time on all island build temporary bridges and block roads not to prevent crabs on their way.

On the island there live tens of millions of red crabs, they are a look, key for the island, as play an important role in circulation of nutrients and formation of structure of rainforests. From October to December there passes the rainy season, annually at this time adult individuals begin migration to the coast where there is a manifolding. Rains provide the necessary conditions, but migration time also depends on phases of the Moon. Eggs are produced females of red crabs to the ocean during inflow in the last quarter of the Moon.

Males head the first wave of migration, gradually females join them. When they reach the coast, males dig holes then to them there come females and there is a pairing. Before returning to the wood, males plunge into the ocean. Females lay eggs within three days after pairing, they remain in the minks as eggs develop, within 12–13 days. After females release eggs to the ocean, as a result of contact with ocean water a set of small larvae at once hatch — they surround the coast while waves and inflow does not wash away them to the ocean. In a month, having passed several stages, larvae turn into the animals similar to shrimps, and the called megalopae. They form groups at the coast, there passes couple of days and there is their turning into of young crabs then they leave water. Their length makes about 5 mm, but despite it, young crabs begin the travel deep into of the island which takes about 9 days. Having reached the plateau, within three years they disappear in rocks, the fallen branches of trees, among a grass and a bush.