Near the Great Barrier Reef they noticed a huge funnel 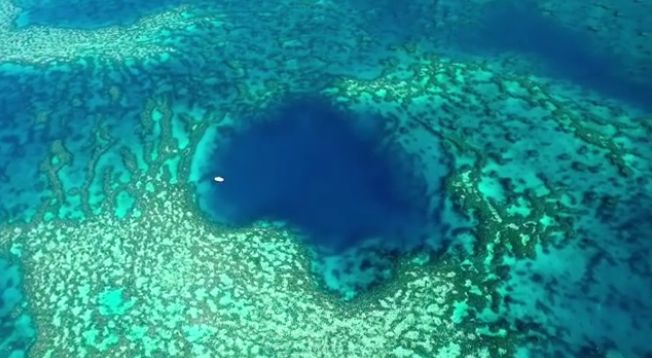 A marine biologist claims to have found a huge underwater karst funnel – or blue hole – on the Great Barrier Reef.

Blue holes are huge sea funnels that formed during the last glacial periods. Then the ocean level was much lower and the funnels were subject to the same erosion from rain and chemical weathering, as was the land. After flooding with water, erosion ceased, and the dark blue cavities remained.

Johnny Gaskell noticed the lagoon using Google, and decided to investigate it more closely. After visiting the place, he discovered a prosperous ecosystem, which he described in his post in Instagram.

“Having noticed the dark blue hole on the Google map, we decided to go farther from the shore than usual to see what is there,” he wrote. “At about 15-20 meters deep, we saw huge corals of the seriatopora, or a bird’s nest , and superlong coral acropora, or deer antlers, these are the largest and most elegant colonies of these coral species that I have ever seen. ”

Five months ago, he said, a cyclone, equal in strength to the fourth category hurricane, hit a part of the Great Barrier Reef. The blue hole was absolutely not affected by the storm; Gaskell suggests that the deep walls of the blue hole were protected by corals.

While it is not clear exactly where the newly discovered hole is located. The storm that Gaskell speaks of could be the cyclone “Debbie” that struck Queensland in March. The weather system moved over part of the Great Barrier Reef, located between Townsville and Mackay.

Not surprisingly, such a huge funnel was not opened earlier. The Great Barrier Reef is the largest structure on Earth created by living organisms. It stretched for more than 2,250 km, covering an area of ​​about 345,000 square kilometers. Scientists constantly find new species here.