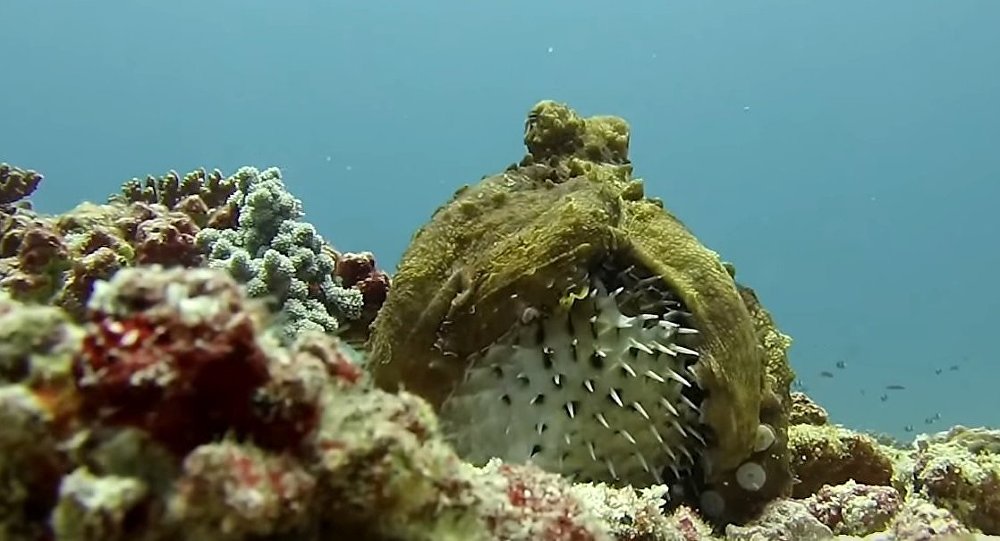 Divers Chris Taylor and Carrie Miller explored a coral reef off the coast of Frigate Island, part of Seychelles, where they witnessed an unusual clash between a blue-ringed octopus and puffer fish, which in case of danger turns into a large spiny ball.

The octopus grabbed the fish and for several minutes tried to drag it into its hole in the coral, but the prey did not budge. Then, probably realizing that the fish was too large to fit in the crevice, the octopus got out from under the coral and wrapped a spiny ball with its muscular tentacles. Divers had to come to the surface before the end of the match, therefore, who came out the winner from this meeting is unknown.

According to Roger Hanlon, a senior fellow at the Woods Hole, Massachusetts Marine Biological Laboratory, large blue-ringed octopuses, also known as daytime octopuses, are capable of handling prey of their size. They can stretch their limbs and tissues, making the opening in the mouth huge.

Octopuses feed mainly on crabs, mussels and other invertebrates, but sometimes they prey on reef fish and other cephalopods. Octopuses use a unique strategy when chasing fast-moving prey. First, they cling to their prey using the sophisticated suckers that dot their tentacles below. Then they bring the prey to the mouth and begin to cut with a sharp curved beak. If necessary, a paralyzing agent contained in the posterior salivary glands is administered.

Although Hanlon believes that the octopus in the video could have eaten puffer fish, he wonders why he decided to attack this large and spiny fish, which is also poisonous. Almost all types of puffer fish contain tetrodotoxin in their internal organs. This neurotoxin makes the fish taste bad for predators and is at least 1200 times stronger than cyanide. One puffer fish may contain enough tetrodotoxin to kill 30 adults, and there is no antidote. But although tetrodotoxin is toxic to humans, no one knows how it affects octopuses. Hanlon suspects that this octopus was not aware of the danger or was immune to the poison.

But even if the octopus was immune to the toxic insides of the fish, how could it consume an animal covered in sharp spikes? According to Hanlon, the muscular tentacles of the octopus have no bones and are so soft and supple that they can wrap around sharp edges without damaging the skin. Perhaps there were no bivalves and crustaceans left on the reef, and the octopus had no choice.