On the ice of the Arctic observed strange holes 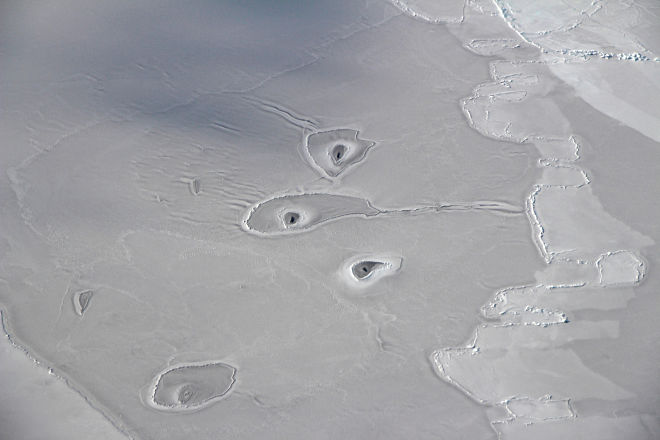 As part of NASA’s IceBridge mission, ice monitoring has been conducted for the tenth year in the polar regions. But on April 14, the team member John Sontag noticed something he had never seen before. The scientist made this photo from the window of a research aircraft flying over the Beaufort Sea.

“We’ve seen these circles in just a few minutes. I do not remember that this was observed elsewhere, “Sontag said. From the photo it is difficult to determine what it is, so all the explanations of scientists are based only on assumptions.

“Sea ice is clearly young, thin, soft and easily influenced. This is especially noticeable along the waves next to the average “amoeba”, “said Don Perovic, a geophysicist at Dartmouth College.

Perovic notes that there can be a general movement of the new ice cover from left to right, as evidenced by the crenellated layering of ice on the right side of the image. This stratification occurs when two thin ice floes collide. As a result of the collision, the ice blocks slide over each other according to the principle of lightning or linked fingers.

“This is definitely an area of ​​thin ice, as near the holes there is a jagged layering of ice, and gray indicates a small snow cover. I do not know what kind of dynamics can lead to semi-circular shapes surrounding holes, I’ve never seen anything like it before, “said IceBridge project officer Nathan Kurtz.

According to one hypothesis, the holes were made by seals to get to the surface beyond the air. “Surrounding forms can be caused by water waves falling on snow and ice, when seals crawl to the surface. Or it may be some kind of drainage holes that sometimes form on the ice, “said Walt Meyer, a scientist at the National Snow and Ice Data Center in the United States.

Sea ice expert Chris Polyashensky from the Laboratory of Engineering and Research of Cold Regions said he had seen this before. He agrees that seal holes are one of the possible versions. It is equally possible that they were formed as a result of convection.

Glaciologist Chris Schumann of the University of Maryland believes that this is the work of warm springs or groundwater flowing from the mountains deep into the land. Another version is that warmer water from the Beaufort or the Mackenzie River finds its way to the surface in the form of a polynya.