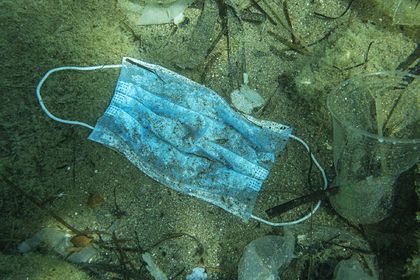 The coronavirus pandemic could have serious environmental consequences – more than 1.5 of the 52 billion medical masks produced this year could have entered the world’s oceans this year. This is the conclusion reached by the Ocean Protection Group Oceans Asia, its report is published on the organization’s website.

According to the estimates of eco-activists, this will lead to additional pollution of the world’s oceans by 4680 – 6240 tons of plastic. Masks are made from polypropylene, thin plastic fibers that take 450 years to decompose. The organization notes that over time, the masks disintegrate into microscopic plastic particles, which can pose a serious threat to the ecosystems of the oceans.

“Plastic pollution of the ocean is killing about 100,000 marine mammals and turtles each year, over a million seabirds and even more fish, invertebrates and other animals,” said Gary Stokes, COO of Oceans Asia. The activist stressed that pollution also negatively affects the fisheries and tourism industry, costing the global economy about $ 13 billion a year.

As one of the measures to tackle ocean pollution, the organization advised governments to encourage the use of reusable masks and help develop sustainable alternatives to disposable plastic masks.

Earlier, Chinese and American scientists in their research have dispelled the myth of the “ecological miracle” that allegedly happened during the pandemic and was associated with an improvement in the state of the environment. According to experts, during the period of forced self-isolation, the amount of harmful substances in the air did not decrease.