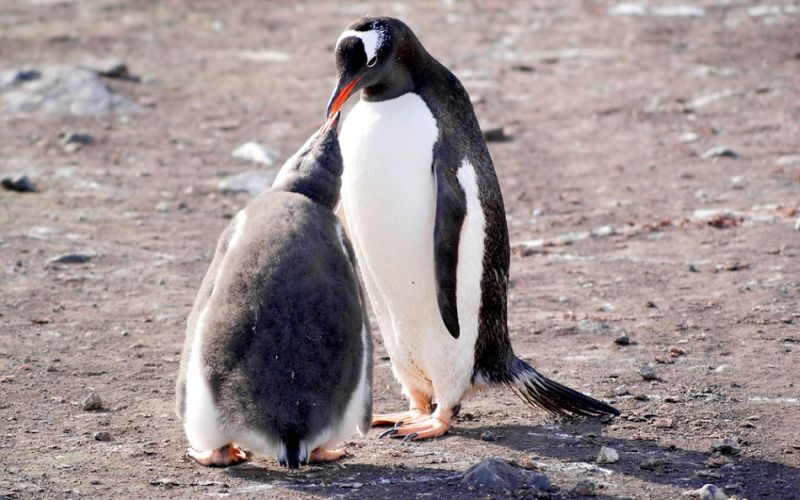 The researchers found that the penguins of the Galapagos Islands, who have already left the family nest, continue to ask their parents for food. And when the ocean current abounds in fish, parents feed their adult offspring. It turns out that people are not alone in their efforts to support the grown up children.

Ornithologists from the University of Washington from 2006 to 2015 observed the life of animals on the islands and came to the conclusion that the care of parents about fledgling chicks is the norm, although it is infrequent. In this case, the parents indulge the children only under the condition of sufficient food, during the hungry months they can and drive off the offspring.

Children, seeing that the parents have completed the hunt, run up to them and beg for fish. Birds distinguish each other by their voices, so the chicks “recognize” the father and mother, who obediently regurgitate food for the overage children. If the “kids” accidentally make mistakes and go to other people’s adults, then they are simply dismissed or ignored by beggars. Scientists have suggested that by such behavior the Galapagos penguins contribute to the maintenance of the species and provide for the extension of the genus, since their habitat conditions can not be called ideal.

The islands located near the equator have a volcanic origin, therefore, most of them are occupied by rocks, rough eruptions of volcanic rocks and alluvial territories. Despite the breadth, because of the cold ocean current, the climate on the islands is much cooler than other areas on the equator. The water temperature sometimes drops to + 20 °, and the average annual water temperature is only 23 … + 24 °. In the daytime, the rocks can get very warm, and at night it can cool down. Thus, penguins must cope with extreme events such as an extremely warm surface and relatively cool ocean waters. In this case, the Pacific waters do not always abound with fish, and penguins have to adapt to the whims of the bounty of the ocean, according to Science Daily.