Rare wavy-hilly clouds were photographed in the USA 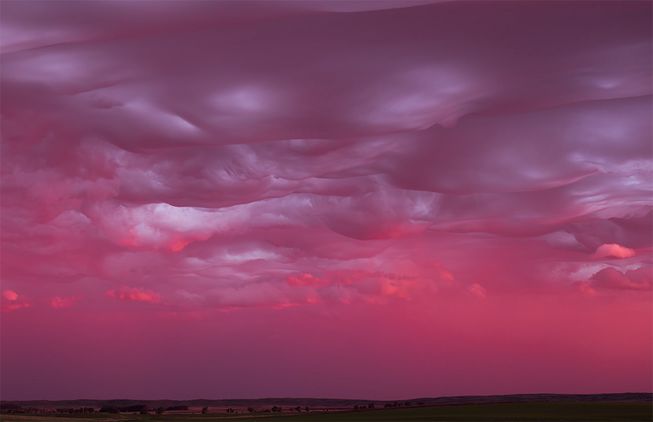 Sunset is always a delightful sight. But what the storm hunter Mike Albinski photographed on the camera is something unprecedented.

“We were hunting north-east of Bismarck in North Dakota and, when the storm died down, we decided to go for a lonely cell on the back of the storm line,” he wrote to Youtube. “We knew that she had a core core and hoped, That the color of the sunset would be magical, at least during the storm, and we also hoped to see a few lightning bolts, but we had no idea what we would soon be facing.The clouds took a dissimilar to the usual, curved, undulating shape, and suddenly we realized , What we see. ”

Oblinsky and his team witnessed the rare formation of wavy-hummocky clouds. The landscape seemed to come off the screen of a Hollywood film of apocalyptic themes. These clouds are usually very low, wavy, liquid and beautifully lit. Oblinski and his team took off the time-laps, and you can see how the beauty of these unique clouds grows at sunset.

In March 2017, the World Meteorological Organization officially recognized the wavy-bumpy clouds of the new cloud category and entered them into the International Cloud Atlas. And this was the first addition to it in more than half a century.

“The cloud consists of well-defined undulating formations in the lower part, its structure is more chaotic and less horizontal than in wave clouds,” the official definition says.

The cloud is characterized by localized waves at the base, it is smooth or flecked with small elements, which are sometimes bent at an acute angle. It’s like watching the surface of the sea from the bottom up.

And here is an even more apocalyptic example of wavy-hummocky clouds.

Olbinski says that a special sunset will remain in his memory for a long time: “It was undoubtedly one of the most incredible scenes I’ve seen, chasing storms for the last 8 years.”