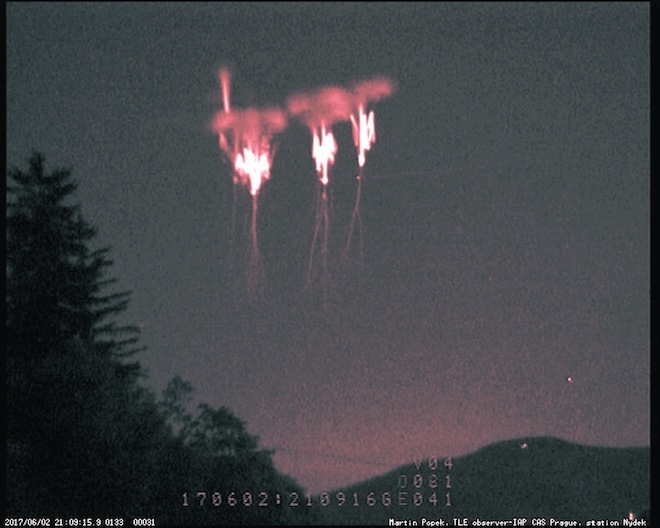 On June 1, a rare phenomenon – the appearance of red sprites – was photographed by Martin Popek from the Czech Republic.

“I was able to capture these changing forms due to a thunderstorm in Slovenia,” the eyewitness explains. Some researchers believe that sprites are associated with cosmic rays: subatomic particles from distant outer space bombard the surface of the Earth’s atmosphere, resulting in the release of secondary electrons, which, in turn, are factors in the occurrence of outbreaks. They also stimulate the appearance of sprites. If this theory is correct, then sprites can appear with increasing frequency over the years, since cosmic rays are amplified by the recession of the solar cycle.

Despite the fact that sprites as a phenomenon were seen a century ago, many scientists until recently did not believe in their existence. And only in 1989, when the sprites were able to photograph the camera from a space shuttle, they became a scientific fact.

Now the hunters behind the sprites regularly take their pictures. As the author of the picture Martin Popek said, he photographed sprites with a Watec 910HX camera with UFOCapture software.