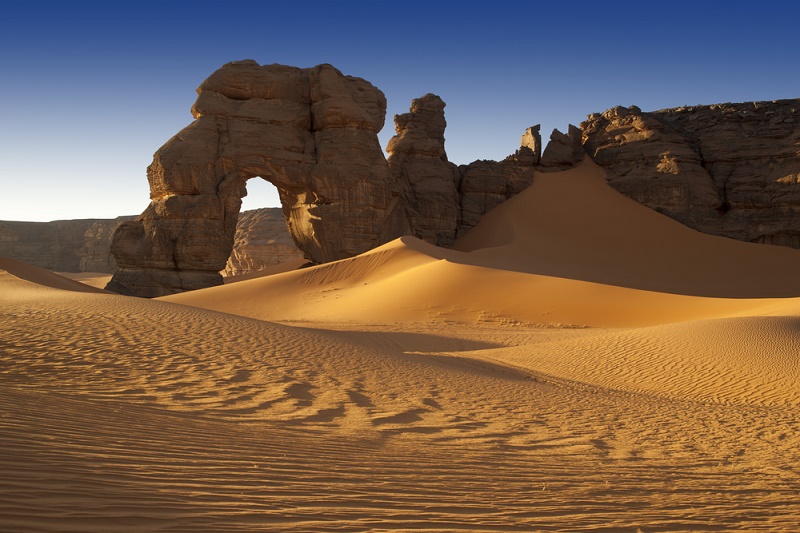 Long before the overthrow of the Gaddafi regime, many experts named the main wealth of Libya not hydrocarbons and seaports, but … fresh water! It sounds absurd at first glance – 90% of the territory of this state is desert. Libya is indeed one of the most arid countries in the world. Historically suitable for permanent residence are the northern coastal areas: here at least falls about 200 mm of precipitation a year – mainly in winter. The summer temperature is kept at + 30 … + 35 °. But all that is south is a lifeless desert. In the summer months there is almost daily a 40-degree heat, and sometimes the thermometer bars are pulled to a 50-degree mark. In the best case, 70-80 mm of precipitation falls in the southern regions of Libya in a year. Yes, and this moisture immediately evaporates. But it turns out that such a Sahara was not always.

It’s hard to believe, but only 7-8 thousand years ago, the Sahara was a flowering savanna! The climate was then different from the modern one. It was even warmer – especially over the continents. The huge temperature contrast between North Africa and the Atlantic strengthened the Guinean monsoon, which brought abundant rains to the Sahara. Moisture not only filled the reservoirs, but filtered through friable rocks. At depths of several hundred meters, huge reserves of groundwater were formed. Its current appearance of the Sahara began to take about 4000 years ago. It became colder, and the monsoon could no longer penetrate far to the north. Precipitation was less, vegetation degraded, and grazing only contributed to desertification. But the underground waters have not gone anywhere.

The subterranean seas of Libya look like this: they occupy more than 1.5 million km² – that is, almost the entire territory of the country! The Nubian aquifer in the southeast is considered the largest known source of fossil water. Its volume reaches 150 km³. To the Libyans this would be enough for thousands of years. During the reign of Muammar Gaddafi, the resources of the Nubian aquifers were decided to be used to solve the problem of water supply throughout the country. The project of the “Great man-made river” – a network of conduits, through which precious moisture would be delivered to every resident of Libya – was launched.

The building was colossal. “The great man-made river” even entered the Guinness Book of Records as the largest irrigation project in history. More than 1500 wells and water towers. The total depth of the wells is 70 Everest, and the used concrete would be enough for 16 Cheops pyramids! By 2011, the volume of fresh water supplies exceeded 6 million km³, it was received by almost 5 million Libyans. The government began talking about the creation of artificial oases, tens of thousands of hectares of irrigated land in the extremely arid south of the country! However, the fall of the Gaddafi regime led to the halt of the project. Many water supply units were destroyed, including as a result of the bombing of NATO forces.

About the project of the “Great Man-Made River” in the Western media almost did not write and do not write, apparently, so as not to destroy the image of Gaddafi-dictator. But here “the powerful of this world” about the water reserves of Libya are well aware. After all, this resource only gets in price every year. In the same Libya, an ordinary bottle of water on average now stands at about 43 cents. So, the barrel will cost $ 68. That is, the water there is already more expensive than oil!

According to experts, this is a very serious problem, and the world community does not pay enough attention to this. And the catastrophe is really coming. At the moment, according to the UN, all without exception the countries of North Africa and the Middle East suffer from water shortages. As some experts point out, Muammar Gaddafi from his underground sea hoped to water the whole of North Africa in the future! The creation of irrigation systems in the poorest countries would solve the food problems, and as a result – give the peoples of the Black Sea economic independence.

This could hardly be liked by those who, by speculating in the price of water, spread their influence in the region.