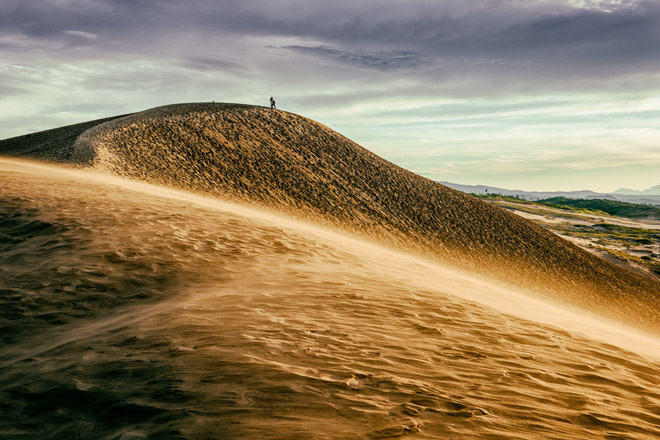 At the thought of Japan, we immediately imagine sakura, kimono, high-speed bullet trains or the famous crossroads of Shibuya. But there is an amazing place in the country, more like a scene from “Arab Nights” than the homeland of Hello Kitty. This golden field, stretching along the coast near the town of Tottori, is the only sand dunes in Japan.

Yellow carpets rise in waves almost to 50-meter height. Sea winds carve ephemeral patterns in the sands, and in winter they are covered by white snow. No traffic lights and cars, only camels from transport, and around – fantastic desert mirages, replacing the lights of a big city.

The sand dunes of Tottori formed thousands of years ago from the sand that brought the Sendai River, which flows into the sea. Strong winds and currents besieged it along the coast, creating a desolate oasis in the Land of the Rising Sun. In recent years, the area of ​​dunes has declined due to changes in sea currents and the invasion of plants.
Only 14.5 km in length and less than 2.5 km in width, this small piece of the large Shanin Kaigan National Park has the status of the UNESCO Geopark and is a symbol of the country’s commitment to preserve the history of culture and biodiversity.

Tottori may not be mentioned in The Thousand and One Nights, but their appearance in several other notable literary works of Japan shows their long-standing cultural significance. Japanese poet Takeo Arisima gave the dunes fame when he wrote a poem about his romance with a married woman, expressing the deep suffering that he felt surrounded by sands. Soon after, he and she committed a double suicide. 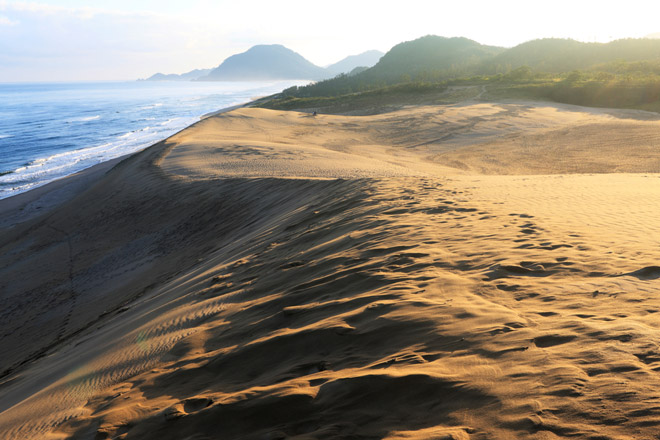 After decades, in the 1960s, Tottori paved the way for the book by Japanese writer Cobo Abe, “Woman in the Dunes,” the film adaptation of which was nominated for the Academy Award.

Every year, more than two million tourists come to the Japanese desert to see for themselves the unique landscape, to walk on camels, to paraglide and visit the Museum of Sand Sculptures.