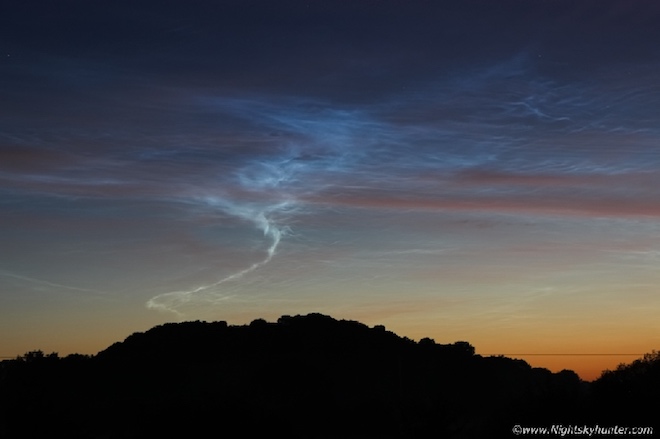 In these nights, noctilucent clouds illuminate the sky across Europe – from Scandinavia to the south of France. According to Martin McKenna of Magera in Northern Ireland, noctilucent clouds appear every night. As he said, since the solstice, their brightness and complexity have become more intense – there are nodules and twists that are highlighted in blue over the yellowish midnight pre-dawn horizon.

McKenne observed this “silvery tornado” on June 25. According to him, it was an amazing sight – this area was dynamically transformed into different forms. You could see the funnel, the “angel wings”, the smoke ring, and then the shape resembling a tornado that reached the horizon.

What creates these forms? Gravitational waves.

Gravitational waves are, in fact, pressure and temperature waves generated by powerful storm systems. Gravity does not change within the waves – this name was given, because gravity acts as a restoring force that tries to restore equilibrium between the air streams going up and down. Gravitational waves can spread from the surface of the Earth to the mesosphere, where they affect the shape of noctilucent clouds.