Smog, shrouded North India in a photo from a satellite 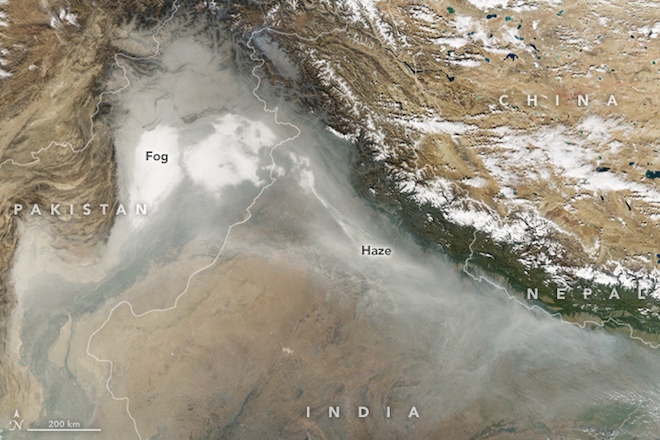 In mid-October, smoke from the burning of crop residues in the Punjab and Haryana spread across northern India and parts of Pakistan. With the onset of the November cold, it mixed with fog, dust and industrial pollution, forming a thick smog. The absence of wind for several days worsened the problem.

On Tuesday, November 7, the MODIS spectroradiometer on NASA’s “Aqua” satellite received this image of haze and fog that enveloped the region.

The second image is a data map that reflects the aerosol optical depth – an indication of how air particles affect the reflection and absorption of light by the atmosphere. Red-brown colors indicate dense aerosol contamination. Several large cities, including Lahore, New Delhi, Lucknow and Kanpur, encountered an increased content of pollutants in the air. 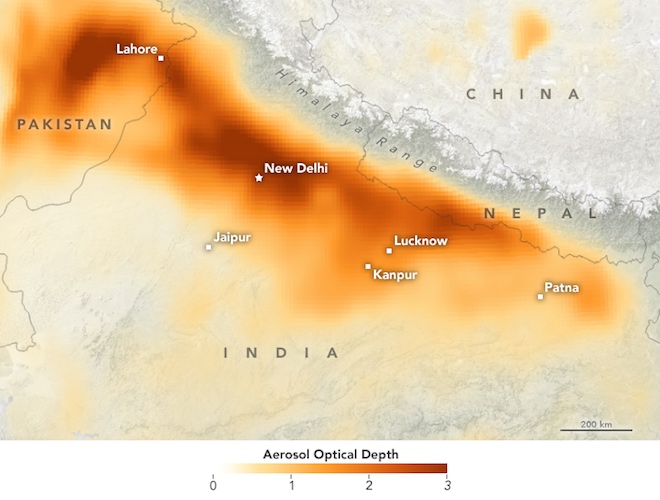 As can be seen from the third image, which was received by the Terra satellite on November 8, a thick haze spread throughout the region.

In New Delhi, the concentration of dangerous particles in the air exceeded the permissible level several times. On Wednesday, November 8, an air quality sensor at the US Embassy recorded a peak value of 1010. Values ​​between 0 and 100 are considered acceptable.

Delhi authorities announced the closure of schools, banned the entry of trucks into the city, stopped construction projects and increased parking fees to prevent driving. In hospitals, the number of patients complaining of breathing problems has increased dramatically. The Indian Medical Association called the public health emergency.