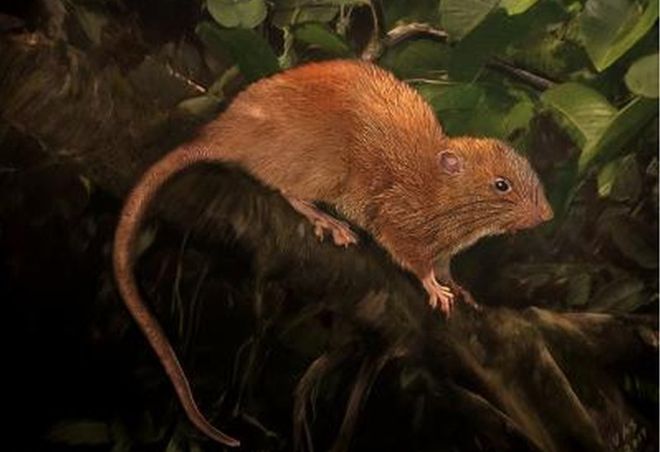 A new species of rats, which are four times larger than normal, were found on Solomon Islands in the Pacific Ocean. The creature, whose length is almost half a meter, lives on trees and feeds on nuts that gnaw teeth.

The Solomon Islands were already home to eight species of rats, but this is the first new discovery in 80 years. About a new species, which was called Uromys vika, has long been told in island folklore.

The chain of islands located about 1.8 thousand km off the coast of Australia is biologically isolated. Most of the mammals that live here do not meet anywhere else on Earth.

“When I first met the inhabitants of Vangunu Island, they told me about a rat they call vika and lives in trees,” says Tyrone Leveri, a researcher at the Field Museum of Natural History in Chicago, USA, who made the discovery.

Despite the search for creation since 2010, Leiveri could not find any evidence of a huge rat, other than large feces. “I began to ask myself whether it really was a separate species or whether people simply called ordinary black rats vika,” he said.

However, in November 2015, the caretaker saw a large rat that fell from a 10-meter tree felled by loggers.

The fall killed the rat, but the caretaker sent her to the Queensland Museum in Australia, where he was examined by Leiveri. “As soon as I studied the sample, I immediately realized that this was something new,” he said. “There are only 8 known native aboriginal rats on the Solomon Islands and, having looked at the skull of a new specimen, I immediately ruled out a number of species.”

After testing DNA, Levery confirmed that this is a new species, which he called Uromys vika.

The newly discovered rat has a long scaly tail, which, according to researchers, helps it to grasp the branches of trees. The ancestors of the animal probably sailed to the islands on plants. Finding themselves on the island, rats have grown large sharp teeth, which they use, according to local residents, to nibble on nuts and coconuts.

Giant. but for a long time unknown creatures probably should be immediately classified as being on the verge of extinction due to intensive deforestation. Almost 90% of the island’s trees have already been felled.

“The area where the rat was discovered is one of the few places where the forest has not been cut down,” says Leiveri. “It’s really urgent – to have time to document this rat and find additional support for the protected zone of Zaire on Vangun, where she lives.”