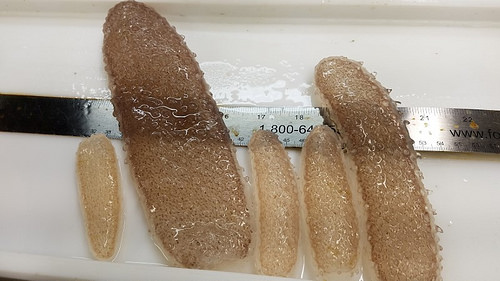 Drifting crowds of jelly-like luminous organisms flooded the coastal waters of the Pacific Ocean from Southern California to the Gulf of Alaska, puzzling the researchers and upset the fishermen. These creatures are called pyrosomes or fire throwers. Their tubular colonies consist of hundreds of thousands of tiny separate creatures called zooids. All together, they are covered with a gelatin shell, which in consistency resembles a marmalade bear.

No relation to the jellyfish pyrosome has and is more like a tuberculate opaque pickled cucumber in the water. Their length is usually several centimeters, although some specimens grow to 0.5-1 meters.

The fire-fed feed by filtering microscopic algae or phytoplankton when swimming with the flow. They glow in the dark, and this ability to bioluminescence gave the organisms a scientific name – pyrosomes, which in Greek means “fiery body.” 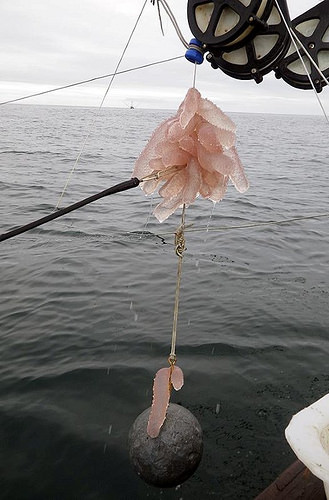 Pyros was rarely seen along the West Coast of the United States until 2012, when they were first noticed in California waters. Since then, the number of firefighters in the United States has begun to grow. First they spread to the north, and this spring their numbers increased dramatically, according to scientists at the National Oceanic and Atmospheric Administration.

Although fire throwers are harmless to humans, they bring huge problems to fishermen in Oregon. Thousands of huge balls of “rubber” creatures hammer fishing tackle. “It goes so far that there are so many of them that you can not fish, so you have to pull out gear and move somewhere else,” says Nancy Fitzpatrick, executive director of the Salmon Commission in Oregon.

Only after a five-minute trawling exploratory network in the Columbia River was pulled 60 thousand piros.

Fishermen also suffered in the southeast of Alaska, where some fishing vessels stopped catching when the density of piros was at its peak.

Scientists believe that the phenomenon of pyrosomes is associated with an increase in sea temperature along the Pacific coast.