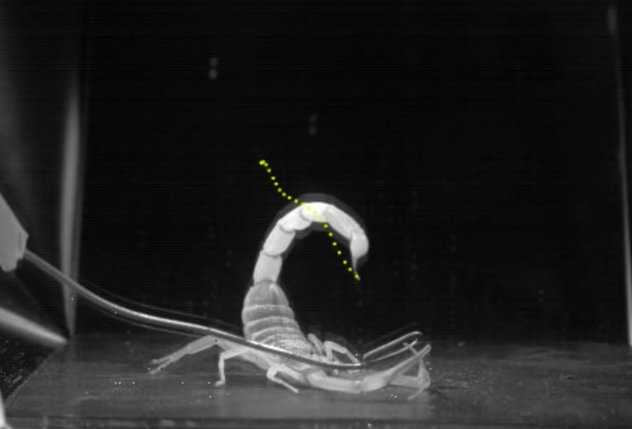 Believed to be the most poisonous on the planet of the Israeli desert scorpion (Leiurus quinquestriatus) was captured by a high-speed camera right at the moment of impact with a poisonous tail. Scientists did this for a reason: they studied the trajectory of the tail movement of different species during the impact and tried to understand the reasons why the deadly part of the body is moving this way, and not otherwise. The toxicity interested them not in the first place, if interested in general.

Comparison of half a dozen individuals of different kinds in action when watching records in slow motion showed an unexpected variety of attacking tactics: the tails of scorpions described very intricate curves (see video). The variety of movements can not be attributed to the individual characteristics of the animal. Scorpio has a very simple nervous system and therefore beats as best he can, his mood here does not matter. The Israeli desert scorpion mentioned above turned out to be the fastest: at impact the tip of its tail moves at a speed of 130 cm / sec. But the trajectory of the tail’s movement turned out to be trivial – a straight blow from the top down. The same open blow has the world’s largest imperial scorpion.

Other species participating in the “championship”, including the transvaal thick-tailed scorpion (Parabuthus transvaalicus) and various representatives of the genus Hottentotta, perform a roundabout stroke, drawing in the air the resemblance of the letter “O” of varying degrees of “subduedness.” “We found that the attack scenario depends on the shape of the tail, thick or thin,” says Arie van der Meijden, leader of the research team and professor at the University of Porto, Portugal.

To capture the lightning strikes, scientists prepared a small area, surrounded on four sides by mirrors. The experimental scorpion was placed in the center of the site, and as an attacking opponent he was offered a wire, which the experimenter teased the animal. The latter was a simple matter. “The simple extraction of them from the container and putting it on the site was enough to stimulate aggression,” Van der Meyden said.


A small clip from the authors of the study

Now the scientists have a new task: to explain why the scorpion impacts are so diverse. Perhaps the whole point is that some of them rely more on claws in defense.

Scorpions use their arsenal, defending themselves against snakes, lizards, rodents and other fans of poisonous food. A man in the number of enemies gets by accident, but often enough. According to the journal Acta Tropica, from the poison of scorpions in 2008, about three thousand people died. It should be assumed that over the decade this figure has not changed much.

Israel’s desert scorpion is found in arid regions of North Africa and the Middle East, where it prefers to hide under rocks. Adult individuals reach a length of 110 mm. Their poison is very dangerous for adults and is often fatal for children.