The cat went on a walk and returned after ten years 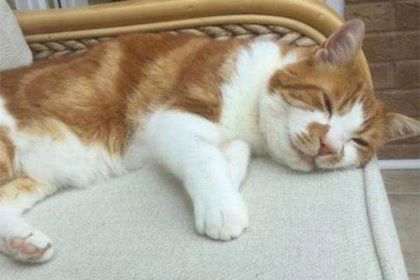 The lost kitten returned to the family after ten years. This was reported by the publication Metro.

A white-red cat named Harry disappeared from his home in Great Yartmouth (County of Norfolk) in 2008, when he was still a kitten. In one day he did not go home from the garden when his master called him. Its owner, 39-year-old Mark Salisbury (Mark Salisbury) thought that he would never see a pet, but regularly updated information about himself in the veterinary clinic, so that he could be contacted if the cat suddenly find it. The man bought two brothers-kittens together on a farm near the city and chipped them.

Ten years later, Harry was found in an animal shelter in Ipswich, in the neighboring county of Suffolk, 80 kilometers from Great Yartmouth. There Salisbari found out that Harry had not been wandering all these years: he was picked up by an old man who had died only recently. The old man’s neighbor brought a pet to the shelter, where microchip employees discovered the real owner.

Now Harry lives with his mother Salisbury, as the family decided that he can not get along with his brother.

An employee of the animal shelter Susie Winship noted that it is very important to chip the cats, and also to include the selected animals to veterinarians so that they can scan the chip and find the owners.