The coal mines in Germany have become a lake edge 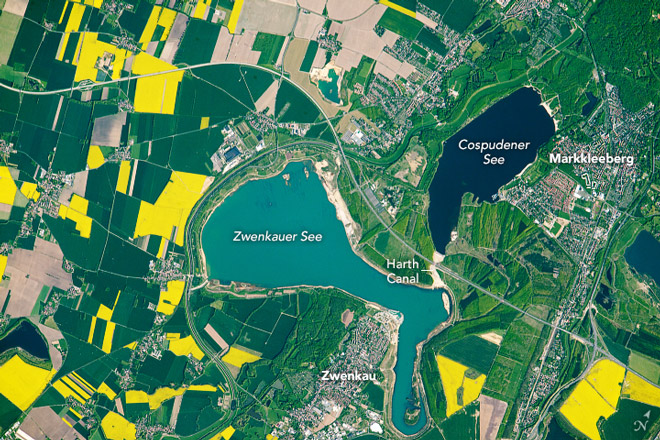 Approximately 200 kilometers south-west of Berlin is the region of Germany, known as Neusenland (“new lake land”). Located to the south of Leipzig, this area is the site of a large-scale project to transform the existing landscape into a real lake district where the water bodies will be connected to each other by canals. In this photo taken by astronauts from the ISS, we see two artificial lakes surrounded by rapeseed, wheat and potato fields.

The activity of the inhabitants of the cities of Zwenkau and Markkleeberg in the early 1990s led to the closure of the mines. Soon after that, the restoration of the region began. Both mines were slowly flooded for 8 years – eventually they became one of the largest lakes in the area. The lake will have to connect the channel Hart, which will allow boats to travel from the port of Zwenkau to the city of Leipzig.

Thanks to the development of lakes, nearby cities, such as Markkleeberg and Zwenkau, are becoming increasingly popular among tourists.