The False Sun shines over Alaska 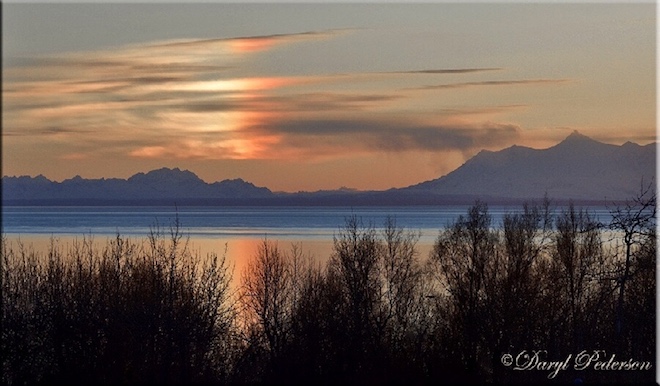 Pargelius (the false Sun) is a common phenomenon. Iridescent bursts of light often appear on both sides of the Sun, when the sun’s rays break through the cirrus clouds. However, on April 20, Daryl Peterson from Anchorage in Alaska witnessed the appearance of an unusual false Sun. According to him, it was a volcanic pargel.

Peterson explained that from the place in Anchorage where he lives, he can see 3 active volcanoes located near the Cook’s Gulf. April 20, he studied the terrain to find a good background for a picture of the northern lights. For the first time in a long time he observed the activity of all three volcanoes. Shortly before the sun set, the pargel formed from a pair that rose above the volcano Sperr. These vapor emissions were frozen in the cold air of Alaska, which led to the formation of ice crystals, which are necessary for the formation of the parhelium. Peterson noted that this rare phenomenon looked even more impressive, thanks to reflection in the water.

Pargelius (which in Greek means “false Sun”) is a kind of halo that arises from the refraction of sunlight in the ice crystals in the atmosphere. It can be observed in the form of light rainbow reflections at the level of the Sun, and there is also a parselen – an analogous phenomenon observed near the moon.