The frozen landscape of Siberia from the satellite 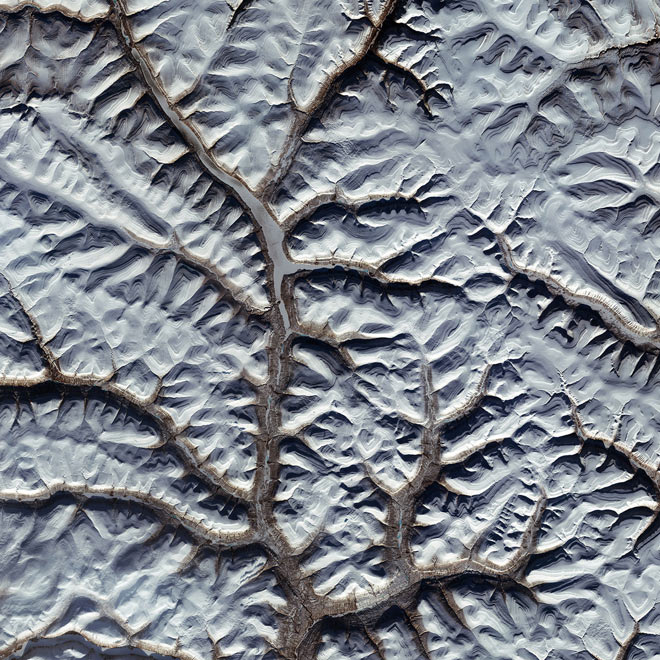 The far and frozen Siberian landscape is similar to the branches of a tree or a vein covered with snow in a new space picture. The Sentinel-2A satellite of the European Space Agency (ESA) has imprinted unique topography of snow-covered Putorana Plateau in the central Siberia on March 2. In the photo the laconic branchy landscape drawing of the region created by flat-topped mountains and difficult system of the rivers and lakes is perfectly visible.

Flat-topped mountains are formed at the expense of a jet volcanism. During this geological process the huge volume of magma filters through the Earth’s surface, creating many kilometers cover above the ground. When magma hardens, cracks are formed, and they are gradually filled by water. According to the ESA, thus there were rivers Putorana Plateau and unique oblong lakes, such as the lake Ayan which is in the top central part of the image.

The plateau is a part of Putorana national natural Nature Reserve, an object of the World heritage of UNESCO. The Putorana Nature Reserve won’t be touched people and it is located on 100 km to the north Arctic Circle, one of the few areas of the Arctic with full ecosystems and abundance of plants.

The region serves as an important route of migration of deer — a rare natural phenomenon. Animals can pass 4,8 thousand km every year, but now their number in the nature was reduced because of influence of climate change on their Arctic area of dwelling.