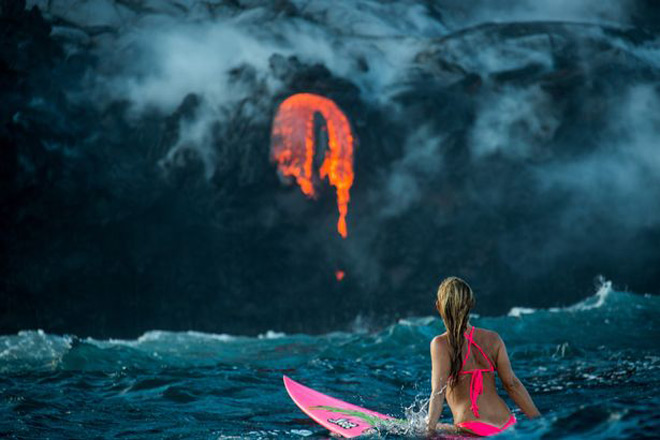 Fearless Alison Teal was the first person who took a ride on a surfboard at the foot of an erupting volcano and swam a few metres from flowing lava. Important point — all Alison did in a bikini!

The photos of extreme skiing Alison Teal is on the pink Board, moving towards the Kilauea volcano in Hawaii that erupts into the ocean.
Underwater photographer Perrin James filmed a brave Explorer of 3 August 2016.

30-year-old Alison says: “It was the dream of my life. It took my breath away, it was hot. I was hoping to catch a wave, but when I got closer, I was hit with a spray of the hardening of the rock, and I quickly dived into the water. I turned around, noticed the approaching wave and began to paddle with all his strength, to get out of the danger zone”.

To arrive to the foot of the volcano by sunset, the intrepid team rose with the dawn and went on for three hours. Then Alison and Perrin took a fishing boat, spent 5 hours at sea and finally arrived to the goal of his journey.

“When I took a deep breath and jumped out of the boat, right over our heads appeared a double rainbow. One end seemed to come out of the lava, the second of our boats,” continues to tell about the adventure Alison. 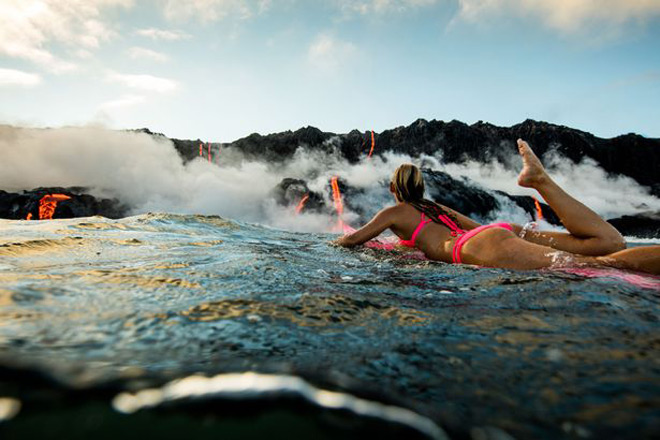 “In the view of the Hawaiian rainbow is the road on which the gods descend to bless the earth.”

“Pele, goddess of the volcano, a very respected and feared in Hawaii. To avoid certain death, it is necessary to observe special traditions”.

“We consulted with the elders and with their permission and under their leadership followed cultural Protocol”.

“Suddenly a terrible sight turned into the most magnificent views in my life.”

Molten lava can roast the human body in seconds, of smoke — a deadly ocean currents and waves of the treacherous”.