The goat has attacked people in shop of Northern Ireland 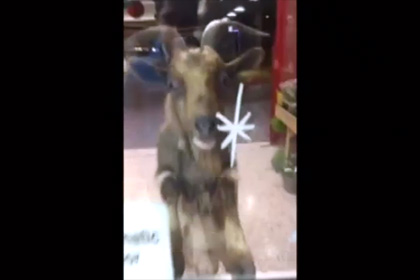 To residents Carrickfergus (Northern Ireland) was necessary to hide in shop from the violent goat who attacked the aged man and jumping on cars on the parking.

According to the story of the manager of shop, he heard knock and thought that brought bread, however behind a door there was a goat. “He, apparently, wanted to break into shop and looked directly at me” — the man shared.

The animal in the room wasn’t let. Having remained on the street, the goat began to attack passersby. The manager tried to drag in shop of one of regular customers, the pensioner by the name of Billey, but wasn’t in time. The goat ran up and butted him behind.

Employees and visitors had to be closed in shop. From there they observed how the animal got up on hinder legs and jumped on one of the cars standing on the parking. Then the goat began to eat flowers from a bed.
A bit later the customer drove up to shop. It went to the ATM at once, and the goat directed behind it. The woman, having noticed threat, ran away into the car and it was locked. And one of employees of a supermarket who arrived at this time to work had to hide in the visitor’s car.

Incident was exhausted when to the scene there arrived the animal owner. It dragged off a goat for horns.

In November the 94-year-old resident of France died after attack of a ram who was famous for the aggression. Most likely, at first the animal butted the victim with running start. Then it jumped on the man hit from legs and began to trample down it hoofs.