The Indonesian authorities have confirmed that veteran Java 145 years 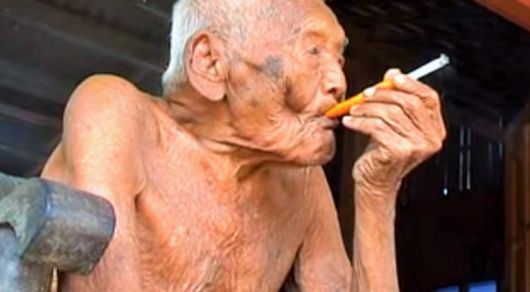 Management of population registers and records of acts of civil status (Disdukcapil) district Sragen on the main Indonesian island of Java confirmed the correctness of the issuance of local resident Sodimico (Sodimejo) internal ID, which indicates that he was born December 31, 1870, said on Tuesday the online news portal Tribunnews.com.

Specified in the certificate of grandfather’s goto (Mbah Gotho — so usually called Sodimico villagers) data Disdukcapil confirmed as a true and not fabricated — emphasizes the portal.

About the age Sodimico we wrote earlier, calling it the oldest inhabitant of the planet. Will he (officially) registered in this capacity is unclear, as the document data has not yet been verified by independent experts, — notes the newspaper the Mirror.

According to British media reports, grandfather, goto survived ten brothers, four wives and all his children. Now even his grandchildren are already independent, and he had no purpose in life, which he, in his own words, tired. However, the place in the cemetery, prepared for Sodimico, according to his grandson, in 1992, still empty.

According to experts, confirm the age Sodimico independently is unlikely. Old Javanese, especially from rural areas, often believe that their years not according to the standard calendar and traditional agricultural cycles, spanning only 210 days. The mistake many years ago could easily migrate to official documents, to gain a foothold in them — and remain to this day.