The inhabitants of Nigeria ate a python that swallowed their goat 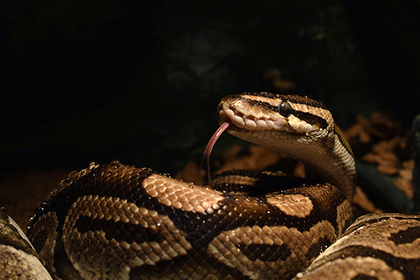 Residents of the Nigerian city of Ojo, Lagos, killed and ate a python that swallowed a goat. This is reported by the publication Naija News.

A snake, living in a nearby swamp, caught an animal that grazed near residential buildings. She managed to swallow her prey before people found her. After such a dense dinner, the reptile could not crawl away, and one of the tenants noticed it.

He raised the alarm, and the neighbors gathered around him.

“The snake was small compared to some that were killed here before,” one eyewitness told the publication. “Thank God that she swallowed no child,” – said another.

People killed a python and took out a swallowed goat from his belly. After that they cooked and ate the reptile.

In Nigeria there are hieroglyphic pythons, which are among the four largest snakes in the world. They grow up to six meters in length and weigh up to 100 kilograms. There are cases when they ate impala weighing up to 58 kilograms, warthogs, young Nile crocodiles up to 1.5 meters long and even leopards.

On August 24 it was reported that in Ghana a farmer farmer killed a giant python who attacked a little girl and tried to eat it.