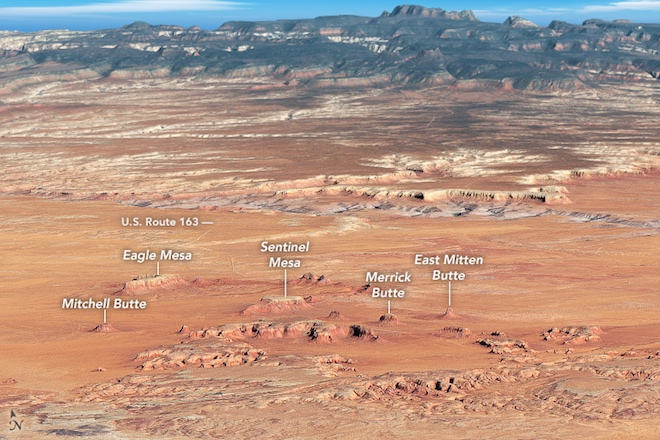 Monument Valley – the quintessence of the Wild West and, probably, one of the most photographed places on Earth. The valley covers about 37,000 hectares along the border of the states of Arizona and Utah. You could see this cult landscape in American westerns, where Hollywood stars rode horseback across the sandy plains among the towering sandstone pillars that dot the Navajo Tribal Park.

Formed in the Permian period, this piece of land was once part of the seabed where sedimentary rocks and sandstone formed into layers for millions of years. Tectonic forces raised the plate above the water line and created a plateau. Then, water and wind removed the softer materials from the sedimentary rock, forming the towering structures that we see today.

A composite image in natural color, allowing you to sense the topography of the terrain, was made from data obtained on May 8 by the OLI instrument on the Landsat-8 satellite and the National Elevation Dataset of the US Geological Survey. 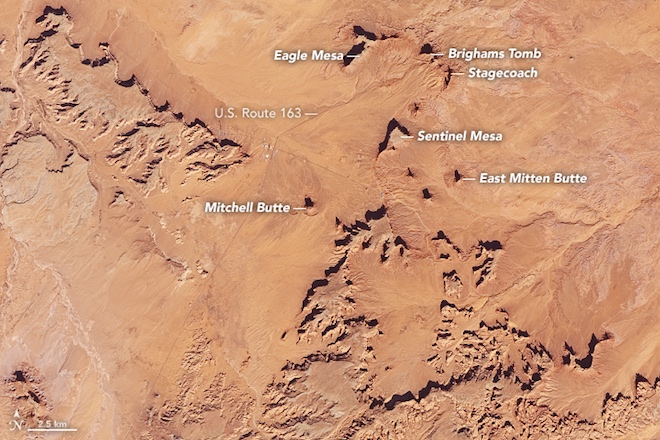 The second image was received by the same satellite on November 14, 2016. The shadows in this picture, taken by a camera directed straight down, give some idea of ​​the differences in height between mezes and butes that extend 120-300 meters above the valley floor level. The bottom consists of sand and siltstone and looks red due to the presence of iron oxides, while manganese oxide forms some blue-gray rocks. A similar landscape was discovered on Mars and was named after this valley.

According to available information, the first people in the area were the Anasazi Indians, who settled here in 1200 BC. e. and created pictograms that can be seen today. Now this area is home to the Navajo, one of the largest tribes of American Indians. Monument Valley, called in the language of the tribe Tsé Bii ‘Ndzisgaii (“Valley of the rocks”), is technically not considered a national park and is managed by the Department of Parks and Recreation Navajo. Tourists can travel to U.S. Route 163, the only road that passes through the park, or set off on horseback accompanied by a local guide.