The mysterious Chimaera of the ocean depths 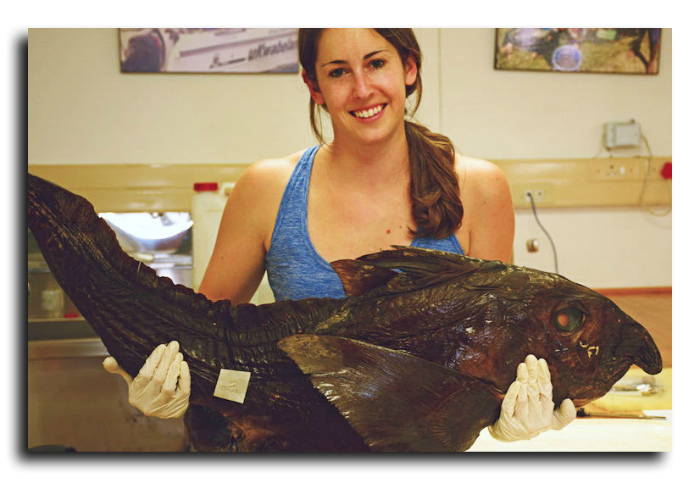 These ocean depths where no sunlight penetrates, owned by the mysterious Chimera. One of them is shark Ghost with Bunny teeth, massive head and fins-wings.

Such individual – 50 a kind of shark found and studied by scientists, reported Live Science. Being a meter long is the second largest among all species of sharks, ghosts, discovered ever.

“Shark-Ghost Hydrolagus еrithacus has quite a bulky head and narrow torso, flowing in a thin bičevidnym tail. The front part of the trunk is very massive,” says Christine Valovich, PhD student research centre in the Institute the Monterey Bay Aquarium Research in California.

Like its relatives, the shark has a “rabbit” teeth. For this feature it was carried to the genus Hydrolagus means “water rabbit” or “water rabbit”. The second part of the name еrithacus – belongs to the genus of birds Robins or Robins (in English they are called robin), it was chosen in honor of researcher Leslie Robin, which helped Valovich study the shark a Ghost.

Hydrolagus еrithacus not like other hidrolago: it is larger in size, and the color is much darker than the other dogs. Despite the name, hydrology sharks are not. Rather, it is distant relatives of sharks and rays: Hydrolagus еrithacus literally fly on the “wings” on the open sea. Scientists call such animals chimeras.

Most of these creatures live at very great depths, so study them very uncomfortable. However, Valovich was able to find out why the shark Ghost “rabbit” teeth, the predator opens the shells of crabs and other crustaceans inhabitants of the seabed on which it feeds.

There are three known species hydrolagus: H. africanus, H. mirabilis and H. cf. trolli. They live in regions of tropical and temperate zone, 17 of the 24 hidrolago are present in all oceans, except the Arctic and Antarctic. H. erithacus is found between South Africa and Antarctica, in the South-East Atlantic and South-Western Indian ocean.