The octopus is scared of the annoying diver 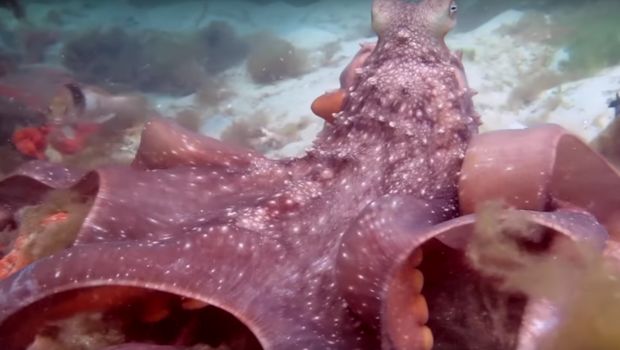 The diver managed to capture on video a meal of the octopus — but that is not too much interference of the observer.

A video posted on the blog about the Pink Tank Scuba diving, was filmed in the waters of Melbourne in Australia on January 31. Encountered with octopus girl diver said that he felt as he started to get irritated from her presence. Octopus tentacles are fanned in the manner of a chute, according to her, it could be as threatening maneuver to scare her off and attempt to grab prey that he spotted nearby. She noted that the color of the octopus has not changed, so she decided that there’s no threat and continued to shoot from a safe distance. But then the octopus like sat down and stared at the diver — it was obvious that he was tired of her presence. After a few seconds, he rushed forward, “torpedoing” the diver — she had to rise by 1 meter over the sand to avoid a collision, and the octopus, meanwhile, sped off into the distance.

According to the diver, she first encountered such an unusual behavior — as a rule, marine animals don’t pay any attention to “strangers” doing their business. She noted that it seemed to her that they with octopus understand each other and, although the intention to hurt her he was not, he evidently preferred to continue the hunt alone.