The secret Pyongyang from an ISS board 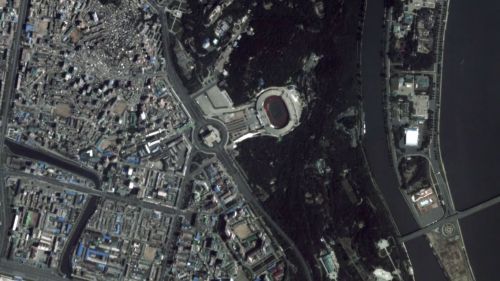 The shooting made from the International Space Station (ISS) allows to look at the capital of North Korea — Pyongyang.

Video was shot on May 30. The roller shows life behind city walls, low-active traffic and even pedestrians who walk on the territory of the Kymsusansky memorial palace of the Sun — a huge tomb where North Korean leaders of former years are buried.

On video significant objects of Pyongyang — Embassy of China, the youth Kaesong park, stadium of Kim Il Sung and the Triumphal arch got. On water the dolphinarium and aquapark are visible.

Though 3,2 million people live in the city, there aren’t enough transport.

North Korea, as well as its capital of Pyongyang, is closed from the rest of the world. As Feras A. Gordon Wood wrote, “to look at it much more simply from space”. Detail pictures and video of Pyongyang became available thanks to the super-sensitive camera “Ayres” mounted on the Russian segment of the ISS.