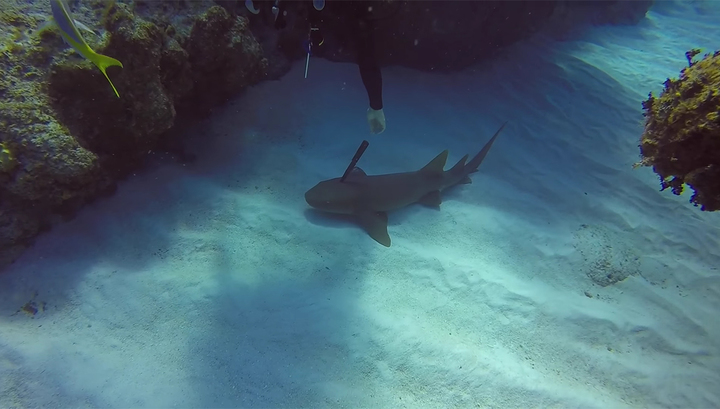 The diving instructor helped the shark in the Cayman Islands, pulling a 30-centimeter knife from her head. The case, the video of which appeared on the network, occurred last week during the sinking of a group of divers near the island of Cayman Brac.

Accompanying the group, instructor Ben Johnson noticed a meter shark near the reef, which behaved unusually, circling in one place. Approached to look closer, the diver noticed that a knife sticks out of the head of the shark, Metro reports.

There was an impression that the fish asked for help, so Ben swam to the shark from above and gently took the knife out of the animal’s head.

According to the diver, the affected animal most likely referred to the species of sharks-nannies. These sharks are not dangerous for humans, since they feed mainly on mollusks and corals.

Who stuck a knife in the head of a shark is unknown. Hunting sharks in the Cayman Islands since 2015 is prohibited, violators are punished by imprisonment for up to four years and a fine of up to 500 thousand dollars.