The tarantula has killed and has eaten a huge snake 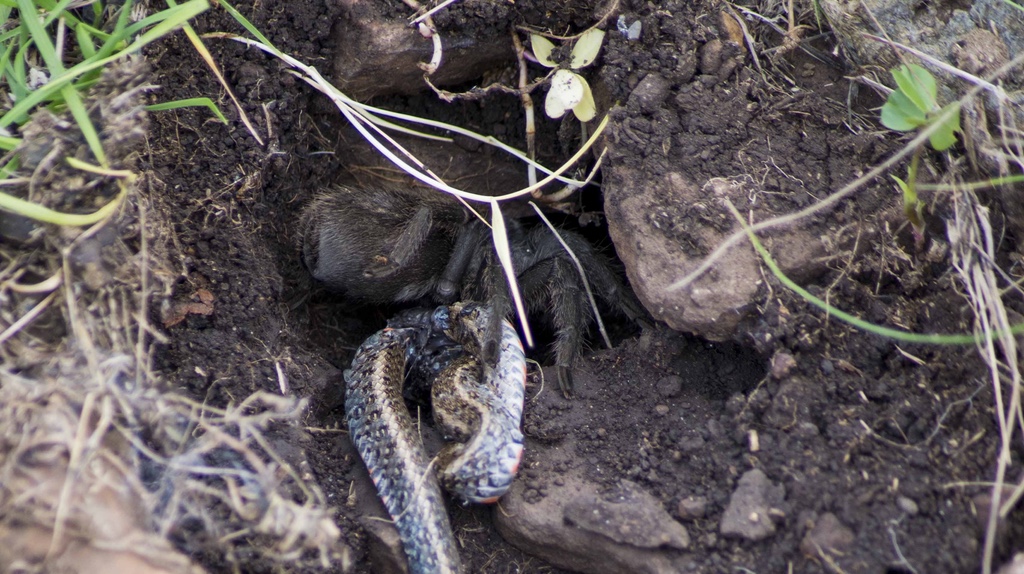 All know that spiders often catch quite large catch in the networks. But who could provide that sometimes the starving tarantula in the wild nature is capable to kill and digest the whole snake!

Imagine the most refined party. As the main course — a land snake. Your guest — a tarantula. There is no need to be spent for napkins and table silver, everything that is necessary for a meal, namely a huge inventory of digestive juice, your visitor already brought with himself.

This party was held on October 23, 2015, in the beautiful town of Sierra-de-Kavera in the southern part of Brazil. The team of scientists found a 38-centimeter dead snake of Erythrolamprus almadensis in a shadow of the hung rock. Together with it there was also a tarantula, the huge Grammostola quirogai turning animal interiors into meat kissel. The research in all beauty describing this event was published in the Herpetology Notes magazine, and remains of a snake were kept for science.

The tarantula literally drew a snake

It appears, to eat huge (in comparison with their own sizes) animals to tarantulas not for the first time, and scientists managed to force them to eat a dragon in bondage earlier. However it was the first case when the similar victim was found in the wild nature, and the similar rarity is quite explainable — hunting for a snake occupation incredibly dangerous, and spiders are known for the care and patience.

Leonardo Malta to Borges, the author of a research and the graduate student of Federal university of the Santa Maria in Brazil not to get used to similar shows. His name also appears in other article Herpetology Notes which tells about how insects eat lizards and Amphibia. In particular, she narrates about how the spider of Aglaoctenus oblongus has a snack on a wood frog.

The female individual of a spider-pizaurida eats a wood frog