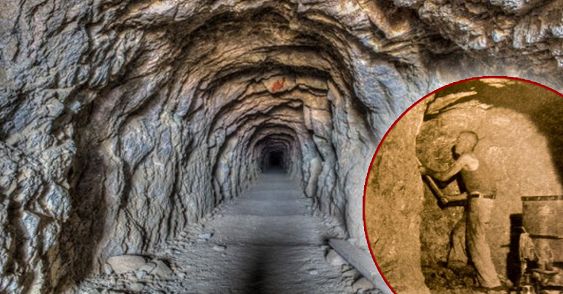 In the territory of Mojave Desert it is possible to find the very lengthiest tunnel on which creation only one person worked in Mexico. This corridor about 2 kilometers in strong breeds stretches.

But the most interesting is that the tunnel does not conduct anywhere. But why then, you will tell, it needed to be created? Uilyami Genri Schmidt known as the Burro dug out the tunnel. This man took every day the tools for work with solid stones and went for realization of the unusual idea. Schmidt did not say to anybody what he does in a tunnel, noting only that he creates the shortest path. However where this path as a result conducts – it is unknown. For a long time Uilyami Henry died, but acquaintances and neighbors very well remembered him. Many assume that Schmidt had mental diseases which caused obsession this or that business. It was only this way possible to explain his idea to dig a corridor in anywhere.

During lifetime he was very greedy person and patched the clothes a sacking or used banks from under canned food for repair of unsuitable footwear. It is known also that during construction the Burro repeatedly was traumatized from explosions. ​ it is surprising, but the tunnel as though is dug out by the professional’s hand. So most likely, Schmidt knew bases of this business and was confident in the work. In some opinions, he tried to find ore and gold.