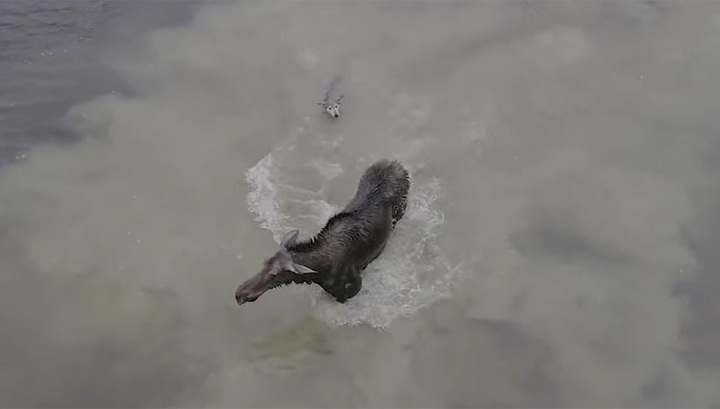 In Canada, in the lens of the quadrocopter accidentally got an episode of hunting a wolf on a large moose. Internet user Dan Nystedt posted it later on his channel in Youtube.

The man with the help of the drone Phantom 4 Pro was engaged in surveying forest species in the north of the province of Ontario. At first he noticed the moose standing in the water, and after a while he noticed how a wolf approached the shoal from the shore.

The predator for a few seconds tried to pounce on the moose and eventually clung to him under the water in the leg. Los, in turn, long enough tried to shake off the attacker. He managed to do it only after a while, after which the elk tried to get away from the wolf.

He tried to pursue his victim by swim, but he was distracted by the sound of a quadrocopter, after which the wolf threw chase and climbed ashore. Los also went further along the bottom of the lake.

The video posted by Nystedt on his channel in two days has received over 100,000 views.