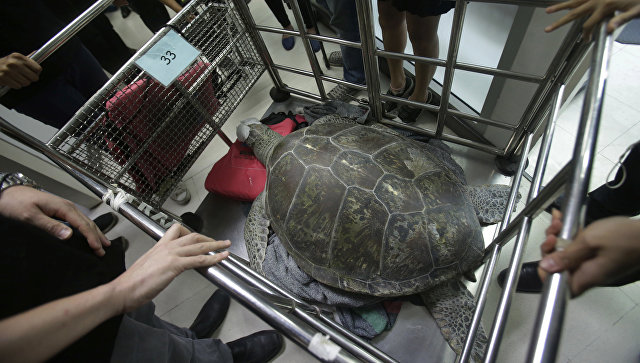 A large sea green turtle named “Pig-Cigarette”, swallowed for several years 915 coins from around the world, died in the veterinary hospital of Chulalongkorn University in Bangkok, reports the Third National TV Channel of Thailand referring to the doctors.

According to the doctors, the tortoise, which had a successful long-term operation to remove 915 coins from the stomach and intestines, died from a 200-fold oversupply of nickel in the blood.

In early March, military sailors delivered a turtle to Bangkok from a zoo in Chonburi province. After the operation, conducted by veterinarians of the University, the turtle became better, she swam in the pool with sea water, and the doctors planned to transfer her to the research center of the naval forces for rehabilitation and subsequent return to the natural environment.

However, last week a 26-year-old tortoise had a bowel turn due to a process of natural bowel narrowing after the removal of the coins, and she had to undergo a second operation. At the same time, doctors discovered complications associated with an overabundance of nickel in the blood, from which the turtle died on Tuesday, the channel said.

“Piggy-piggy”, belonging to the species of sea turtles, threatened with extinction, lived several years in a pond with sea water in one of the tourist zoos in the province of Chonburi. In its pond, tourists and locals regularly tossed coins “for luck” and “to return.” Green sea turtles live up to 80 years old, so the university doctors hoped that the “piggy bank”, a female of reproductive age, recovered and released to freedom, can play an important role in preserving its species.