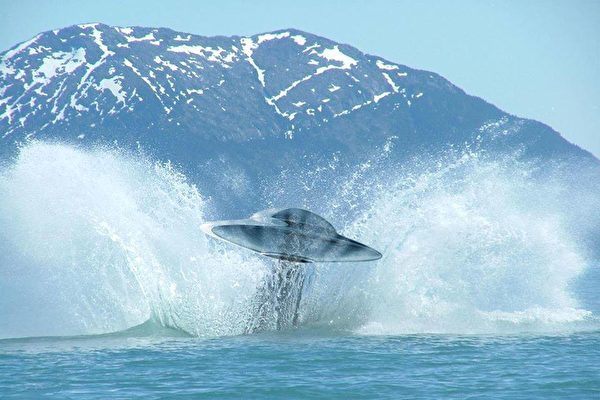 Ufologists say: humanity is literally “under the hood” of aliens. And they are watching us not only from space, but also from under water.

By the way, about the same sometimes, you can hear from experienced divers. According to them, the waves hide a lot of secrets.

They actively talked about this when radars and echo sounders used under water appeared.

The fact of a strange whirlpool recorded by Japanese scientists in the 80s is widely known. According to instruments, the maelstrom was in the waters of the Pacific Ocean at a depth of 500 meters. Moreover, according to experts, its rotation speed and dimensions were such that they did not fit into the term “natural phenomenon”.

Another case, which remained a mystery, was recorded in the Mediterranean in the summer of 1997. The sailors saw a spherical object literally burst out from under the water. Its size reached 60 meters in diameter. Rising above the water, he literally hovered above it, illuminating everything around him with light shining from under some kind of spotlight. This went on for several minutes until a large wave rose, which pulled the strange object back.

Witnesses of a similar incident were sailors from Norway a month later in the same waters. This time, an object up to 250 meters in diameter rose above the water, which accompanied the Norwegian trawler several meters, hanging next to it. Interestingly, until it dived again under water, all the ship’s devices were out of order and there was nothing to be done about them. .

In 2002, tens of thousands of small balls the size of a tennis ball were carried ashore by Hampton. They were perfectly round in shape, and the material was similar to synthetics, however, scientists, how many did not fight over the riddle, could not solve it.

Skeptics, on the other hand, came to the conclusion that the “balls” are most likely of natural origin and are fibers rolled up by waves.

Another story about the secrets that the ocean holds is not at all like a science fiction film, but the fact remains.

This happened in the 90s, off the coast of Florida, when the crew of a small ship noticed in the water a man dressed in a diving suit, which was in use more than half a century ago. The man called himself Fred Appany and said that he was one of the participants in the exercises on underwater mining, which took place in the area in 1938.

Under water, the man became ill due to problems with oxygen in the damaged scuba and he lost consciousness. What happened then – did not remember.

Journalists became interested in a strange story and conducted an investigation that found out that this man had indeed plunged into the water many years ago, conducting exercises, but then disappeared. All these years he was considered missing.

They could not oppose anything to UFOs and warships.

So, the NATO squadron in 1993 was forced to drift due to the effects of a severe storm in the North Sea. After a short period of time, strange objects appeared over the destroyers. They hovered over the ships, and then sped off with great speed. And with them one of them disappeared. The pursuit and further searches yielded nothing.

One can relate to such stories differently, but even senior military men conduct reports on them, sometimes citing photographs as evidence.

Moreover, scientists even made a map of the appearance of “water UFOs”.

Most often, meetings with them take place in the Atlantic Ocean (60%), in the second place for such incidents is the Arctic Ocean and in third place is the Pacific.