Unusual clouds over the Pacific Ocean 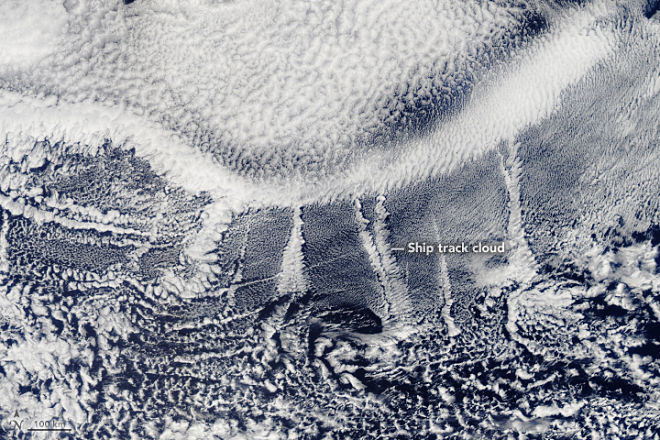 In August of this year, long narrow white bands stood out against the background of clouds covering much of the northern water area of ​​the Pacific Ocean. These traces of ships are a peculiar form of clouds that form when water vapor condenses around the microparticles of exhaust gases from ships. They are usually formed in areas where low stratus and cumulus clouds are present. The discarded microparticles consist of water-soluble elements, so they can connect to the vapor, forming clouds that can be seen from space.

Clouds formed as a result of the ship’s exhaust gases contain more droplets, while the droplets themselves are smaller in size than in uncontaminated clouds. As a result, light, getting into them, dissipates in many directions, making them especially bright and dense.

The MODIS instrument on the Aqua satellite took this picture in natural colors on August 26 – traces of ships extend to the north. The clouds were about 1000 kilometers west of the border between California and Oregon. Similar ecological conditions also provoked the formation of traces of ships in this part of the Pacific on August 27 and 28. Analysis of the results of annual observations using the AATSR tool on the ESA satellite Enivisat shows that very low clouds are most often present near the western coast of the Americas.

The large number of ships crossing the northern part of the Pacific Ocean, combined with low clouds, leads to the fact that traces of ships in this part of the globe are more common than elsewhere. According to the study, about two-thirds of the tracks of ships are formed in the Pacific Ocean. They are also observed in the North Atlantic, off the western coast of South Africa and the west coast of South America. The research team also found clear signs of seasonality in the formation of these clouds: most often they are observed in May, June and July, and are only occasionally present in December, January and February. The movement of vessels is more or less constant throughout the year, so the cycle is mainly due to seasonal changes that affect the formation of low clouds.