Unusual relationship of people and animals 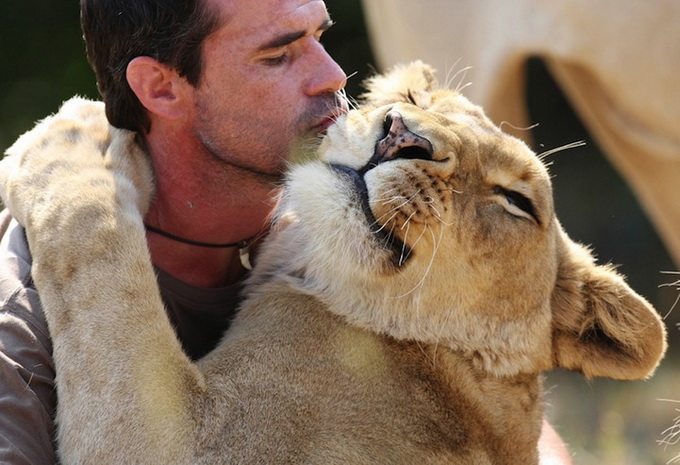 There are people who truly are friends with animals. Not with some abstract and concrete. For example. conservationist Casey Anderson is friends with grizzly bears Brutus and zoologist Dolph Volker — female Cheetah.

They often say that between a man and a woman “just friendship”. This is hardly the case, because people are able to establish personal relationships, even with wild and dangerous animals. It happened with the conservationist Casey Anderson (Casey Anderson), who for many years supported almost true friendship with grizzly bears Brutus. Wild — and even dangerous — bear was playful and a loyal neighbor that inspired Anderson to create a small center for the protection of these animals. Montana Grizzly Encounter helps to explore and maintain their population in the North-West of the USA.

The zoologist Dolph Volker (Volker Dolph) — its a friend of the world wild animal, the female Cheetah. From a scholar working in Africa project Cheetah Experience, the relationship with the large cat require a lot of care. At birth faith was struck with meningitis, the virus has damaged the development of its nervous system and skeleton. Life, even with the assistance and protection of people is not easy, and Volker examines how the body of gepardi adapted to disturbances. And often just divides her bed: judging by the video, it needs huge patience. Behaves wild cat is at home, literally “squeezing” a scientist with a warm bed and sprawling on the pillows.

Sean Ellis (Shaun Ellis), nicknamed the wolf Man — another zoologist, conducting their studies with full immersion in the subject. But his interests were the opposite Volker: it’s canids including dogs, coyotes and, of course, wolves. A few years ago, Ellis has managed to gain its place in one of the wolf packs and regularly striking journalists their dangerous games among wild animals, the mastery of imitation of their howling — and long refusal to wash, so as not to destroy their scent, by which animals evaluate it.

However, it is not difficult to find points of contact with the reptile — he’s hardly even possible for such uncouth and simply organized creatures. However, people sometimes keep with them a strange relationship. As, for example, lives Chito (Chito), a fisherman and a shaman from the jungles of Costa Rica, which has managed to establish a sort of communication with the local river crocodile nicknamed Pocho. 20 years ago people found him wounded by poachers and is completely blind, out — and became friends forever.