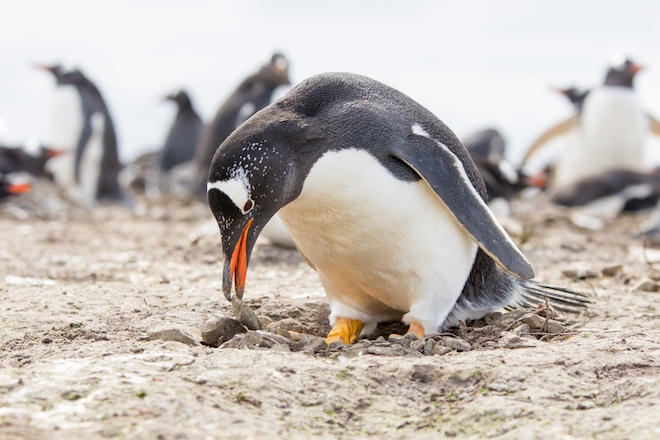 One of the largest colonies of Gentoo penguins in Antarctica has been repeatedly destroyed almost completely by volcanic eruptions over the last 7,000 years, a new study showed.

An international group of scientists led by the British Antarctic Administration studied the ancient guano penguins and discovered that the colony was approaching extinction several times due to the spread of ash from the Deceptephen volcanic island.

Ardley Island, near the Antarctic Peninsula, is currently home to about 5,000 pairs of Gentoo penguins. Using data from chemical analyzes of the penguin guano extracted from the sedimentary rocks of the island lake, the researchers uncovered the history of the colony.

Climatic conditions in the Ardley Island region as a whole over the last 7,000 years were favorable for penguins, and the team expected to detect only minor fluctuations in the local population in response to climate change or sea-ice levels. But it turned out that the nearby Deception Deep has a much greater impact on birds than expected.

According to the lead author of the work of Dr. Steve Roberts, by measuring the chemical composition of sediments, the team managed to estimate the population size during the entire period and see how the penguins were affected by volcanic activity. At least three times in the past 7,000 years, the penguin population was close in magnitude to today, but almost completely destroyed locally after each of the three major eruptions. On average, its recovery took from 400 to 800 years.

“This study shows how serious the impact of volcanic eruptions on penguins can be and how difficult it is for the colony to fully recover. The eruption can bury the chicks alive in the abrasive and toxic ash. While adults can swim away, young penguins are killed in freezing waters. Nesting sites can also be covered with ashes and remain unsuitable for life for hundreds of years, “said ecologist Claire Valuda.

The techniques developed during the research will help scientists determine past changes in the size of the colony and predict the impact of eruptions on other penguin populations. For example, the Antarctic penguins on Zavodovsky Island, affected by eruptions of the Kerry volcano in 2016.

“Changes in penguin populations in the Antarctic Peninsula are associated with climate variability and sea-ice level changes, but potentially devastating long-term effects of volcanic activity have not previously been considered,” the ecologist concluded.