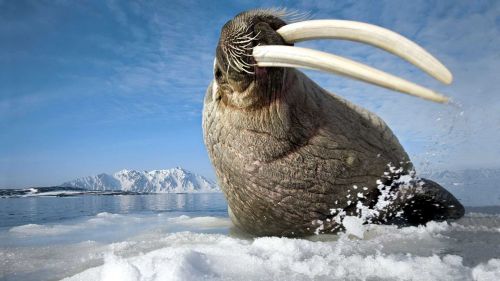 Researchers have found out that walruses play with birds. Marine mammals throw and heat birds: sometimes such entertainments come to an end with the death of the last.

Scientists reveal more and more unusual habits at Pinnipedia every year. And now the Russian researchers have for the first time described a case when walruses play “dangerous Angry Birds”. Scientists made observations on Kolyuchin Island located in the Chukchi Sea. There walruses of Odobenus rosmarus and a bird live. The last nest near rookeries of marine mammals.

Walruses seem “lovely” and “phlegmatic”. However actually it not always so. Scientists have found out that these animals are very playful and prefer active entertainments with participation of birds. During observation walruses of 71 times interacted with birds. “A subject game at wild walruses is described for the first time”, – researchers Karina Karenina and Andrey Gilev say.

Pinnipedia play with birds, as with soccerballs. Walruses throw birds, blow on them nostrils, sprinkle water. Sometimes the partner – other walrus is connected to such game. After “the friendly match” the bird can be eaten, but usually it happens to already dead birds. Games of walruses with live birds, strangely enough, come to an end with the death of the last rather seldom.

Most often – in 80% of cases – with birds young males arrange entertainments. Females of walruses and older males are almost not interested in such games. Observations are interesting also because walruses as they show other researches, very seldom attack warm-blooded. Most often these Pinnipedia prefer in food the plastinchatozhabernykh of mollusks and other ground invertebrates. Sometimes fish enters their diet.

Odobenus rosmarus – a unique for today type of family the morzhovykh. By the body sizes among Pinnipedia the walrus concedes only to a sea elephant.

Earlier, we will remind, other researchers have filmed the seal cannibal who has drowned and eaten a cub. Scientists consider that such strategy can increase chances of reproduction at these animals.