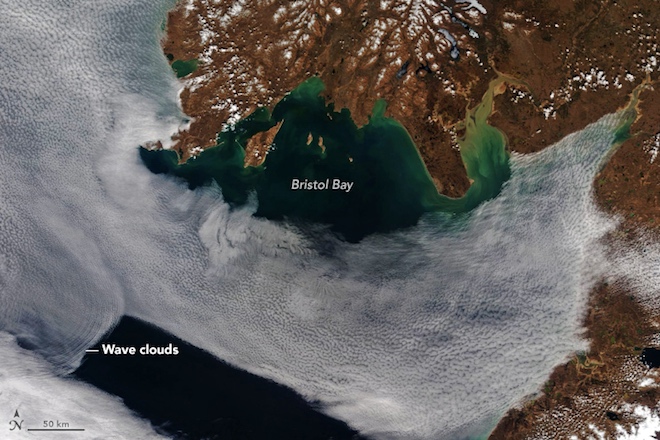 Sometimes clouds take incredible shapes, pointing to invisible processes in the atmosphere. The wavy clouds in this image, floating above the Bristol Bay in south-west Alaska, are the result of a collision of two air masses.

The picture in natural color was made on May 14 with the help of the MODIS spectroradiometer on NASA’s Terra satellite. The clouds are probably stratocumulus. They are low-level and cumulus-like, but more.

According to Sam Albanese, a meteorologist at the Anchorage National Weather Service, the weather that day was under the influence of a weak high-pressure area. West-north-west winds drove clouds toward the peninsula of Alaska and along the coast. The slightly convective nature of these clouds is noteworthy, and the fact that they wrap around the Gulf Coast, while the heavens above the earth are pure.

At the same time, the warm front moving in this region led to the appearance of a strip of bright white clouds in the lower left corner. Where a mass of warm moist air meets with cold and dry air from the land, wavy clouds form. This type of cloud is formed on the waves of colliding air masses, condensing in the ascending part of the wave and evaporating in the descending one.