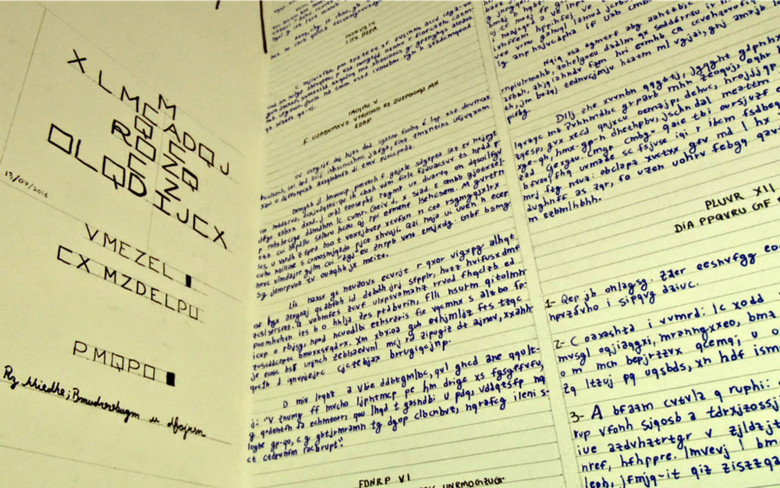 March 27, 2017 in the Brazilian state of Acre from his house disappeared 24-year-old student Bruno Borges (Bruno Borges). Later it turned out that he was working on a “project that would change his life for the better” by remaking his room for him: he removed furniture from it, painted all the walls with encrypted inscriptions and strange symbols, hung up self-portraits with aliens, and left 14 manuscripts .

The main mystery for the police looking for a student was a large statue of the famous Italian philosopher Giordano Bruno, who was burned in 1600. How she appeared in the room, and why she stands on the painted “Alchemical circle of transformation” – is unknown. According to the parents of Borges, they do not know why he might need a sculpture for 2.5 thousand dollars.

For a month of searching around Bruno Borges in Brazil, a lot of legends have been formed: some say that he turned into a statue, others say that he was abducted by aliens because of the project. The police were able to find people who helped the student at the Faculty of Psychology, but their testimony only confused the story.

Bruno Borges began working on his project in early March – he locked himself in a room and painted the walls for more than 20 days. March 17, ten days before the disappearance, he was brought to the almost finished statue of Giordano Bruno, which he bought via the Internet. March 27, the Brazilian finished the “project”, waited for the parents to return from the trip, and after a family dinner took a backpack and just left.

Investigating officer Fabrizzio Sobreira (Fabrizzio Sobreira) told the Brazilian edition of Globo that the police managed to partially recreate Borges escape from the house. The last time the student was seen about an hour after leaving: Bruno got out of the taxi near the motel. At the same time the hotel was told that he did not take a number from them. 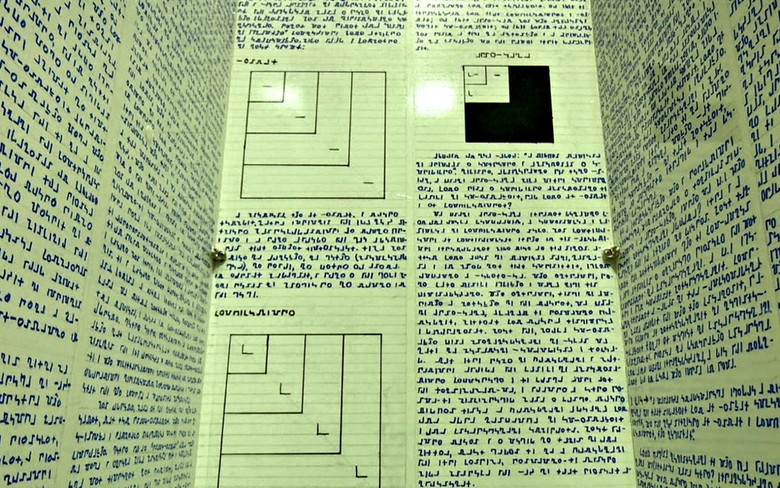 According to Globo, a few days after that, the Brazilian came to the tailor and asked him to sew three cloaks “as in the pictures”, which he brought with him. To the question “Do you need this for the church?” Bruno answered: “Almost.”

The police believe that then Borges left the city or even the country. Sobreira noted that he received reports that the missing student was in Peru and Chile, although there was no evidence to support this version.

On April 18, the police declared Bruno “missing” – now Interpol was connected to his search.

With the “project” Borges was helped by a whole team of people. They together painted the walls of the room of Bruno, while his parents left for a month on a trip. They also helped the Brazilian to encrypt all 14 books and sponsored his ideas: the student’s cousin had invested about 20 thousand Brazilian reales (about 350 thousand rubles).

The police tried to find out from Borges’s assistants where he had gone, but it turned out that the whole team had entered into a non-disclosure pact with each other.

– As we understood during the investigation, they agreed not to disclose the project Bruno. We can not convince them to tell everything, even under the threat of giving false testimony.
Fabrizio Sobreira, police officer

A friend of Bruno said that they painted the room for 24 days, trying to use every inch of walls. He said that during the creation of the project they “did without food” and did not go outside the room. 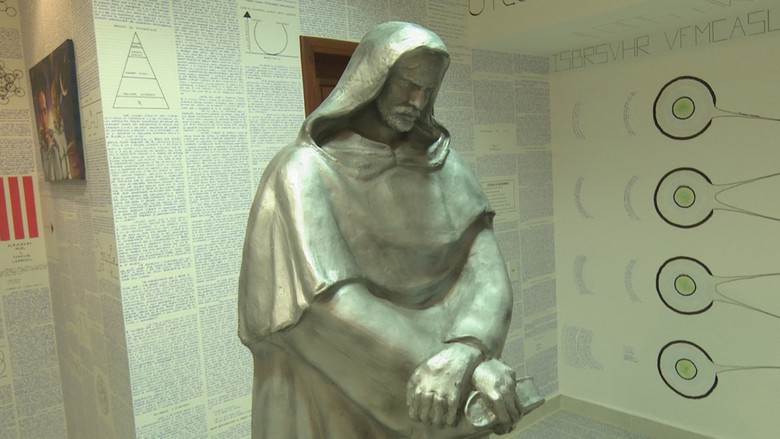 The police are working out several versions of the disappearance at once, and therefore pays great attention to encrypted inscriptions. According to Sobreira, in books he could describe the plan of the “project”, part of which was leaving the house.

At the same time, Bruno left several clues in his room. The investigators found special “keys” on the shelves, which should help decipher the inscriptions on the walls and in the books. The sister of the missing Gabriela said that she could translate a small part of the brother’s work: it is called “Theory of knowledge absorption.” However, the “keys” are not enough to understand everything that Bruno wrote. 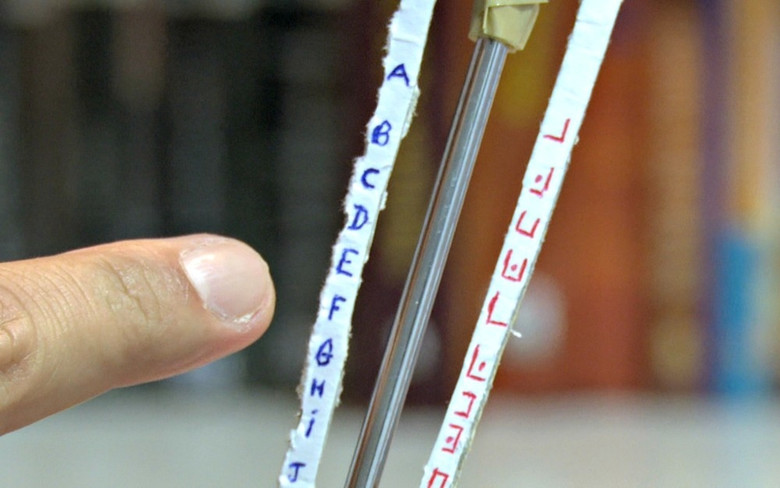 One of the “keys”

To understand the text that left Bruno, you need to translate five different ciphers. Some of them are light enough: for example, one of them is based on the “Boy Scout Book”. Other students still can not make out the student’s family.

The media published several photos and videos from the Borges house, which enabled social network users to try translating symbols on the walls. In the Facebook community, where they united, nearly 20,000 people have been deciphering the inscriptions for a month already.

Judging by the translations on the site of enthusiasts, Bruno argued about the man and his role in the universe, philosophy and religion. In his writings, Borges referred to the Greek thinkers, Freud and the author of Howard Gardner’s Theory of Multiple Intelligence. According to Sister Borges, the members of the Facebook group “could solve the light ciphers”.

Reincarnation of the philosopher

The edition Globo found the 83-year-old sculptor Jorge Rivasplata (Jorge Rivasplata), who made for Borges a statue of Giordano Bruno. According to Rivasplat, his work completely repeats the monument on the Roman square Campo dei Fiori.

The edition Globo found the 83-year-old sculptor Jorge Rivasplata (Jorge Rivasplata), who made for Borges a statue of Giordano Bruno. According to Rivasplat, his work completely repeats the monument on the Roman square Campo dei Fiori. 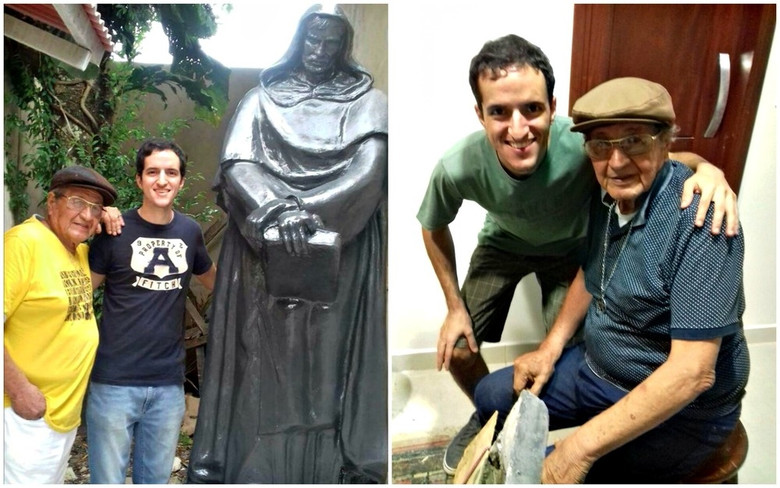 Giordano Bruno was an Italian philosopher, who was burned at the stake in 1600. He was one of the first who suggested that there is extraterrestrial life, so the statue of the philosopher in the home of a Brazilian student gave rise to conspiracy theories about his abduction by aliens. However, Rivasplata said that Bruno Borges is the reincarnation of Giordano Bruno. External similarity of the Brazilian student and the Italian philosopher noticed in social networks.

“Most do not understand, but I’ve known him for a long time.” You will not believe, but this is the reincarnation of Giordano Bruno. I can not say more. The only thing I can do: these books are unfinished works of Giordano.
Jorge Rivasplata, sculptor

The sculptor brought a monument to Borges’ apartment on March 16. It was unfinished, so Rivasplat completed the work right in the student’s room. According to him, Bruno studied with him, so the artist made him a big discount and sold the monument for 2,5 thousand dollars.

Doctor José Medeiros, who founded eight spiritual centers in Brazil, took the side of conspiracy theories and said that in 2016 Borges consulted him about his secret project. According to Medeiros, the student “saw the spirits,” and he himself could be a medium and the reincarnation of Giordano Bruno.

For a month of searches, Bruno Borges managed to become not only a hero of conspiracy theories and extraterrestrial interference, but also several mobile games. Local developers have created applications to solve the ciphers, and in one game, users must escape from the haunting statues.

The creator of the most popular game, Filipe Nunes (Filipe Nunes) noted that the mysterious disappearance gave rise to so many versions in social networks and the media that it is impossible to believe in the majority. But, he said, the main thing is that Bruno eventually found himself alive.