Why did the river Shingu in Brazil change the course? 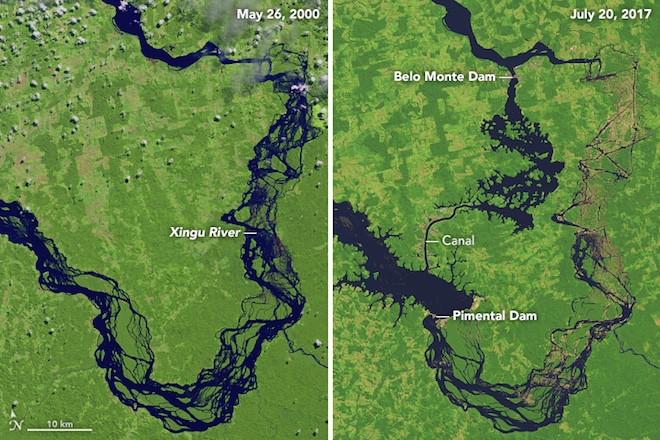 As you can see on the submitted satellite images with a difference of 17 years, the right tributary of the Amazon – the Shingu River – has changed significantly over the years. And this change is of a purely human nature.

The image on the left was obtained on May 26, 2000 using the Enhanced Thematic Mapper Plus multispectral scanner on the Landsat-7 satellite. Here you can see the site chosen for the construction of the complex of Belo-Monti hydroelectric power stations in the northern part of Brazil. At that time, the river was still flowing freely along its own channel. The project was first considered in the 1970s, but construction did not begin until 2011.
By the beginning of 2016, after the first dam Pimental was built on the Shingu River, the water formed the main reservoir. Soon, turbines were operating, and by April 2016, electricity was supplied to the grid. Now the complex consists of numerous dams, canals and power stations.

The right image received on July 20, 2017 using the OLI tool on the Landsat-8 satellite, shows what this site looks like now.

The water in the Shingu River usually flows north to the Amazon, but first it temporarily descends to the south and follows a 100-kilometer river bend in the Volta Grande area. Now only about 20% of the original river flow travels along this bend.

A decrease in the volume of water in this area led to the appearance of new dry areas, indicated by brown color. Dehumidification, in turn, affected the life of unique aquatic inhabitants and local indigenous tribes.

In addition, the pictures show significant changes in the number of forest and agricultural lands. According to analysts from the Monitoring of the Andean Amazon Project (MAAP), some of the recently flooded areas were deforested.

Because of the dam, 80% of the stream is now diverted to the main reservoir, from where it enters through the canal into the second reservoir. The right image allows you to see in detail the main reservoir and part of the canal. The new flooded areas occupy about 200 square kilometers of the area, according to the assessment of MAAP experts.

When in 2018 Belo-Monti is fully operational, it will have a maximum capacity of 11,233 megawatts, becoming the fourth largest hydro plant in the world. The actual electricity produced will on the average be much less – around 4,500 megawatts. But, as expected, the project will help meet the energy needs of Brazil and will contribute to its economic growth.