Why the dolphins are beaching? 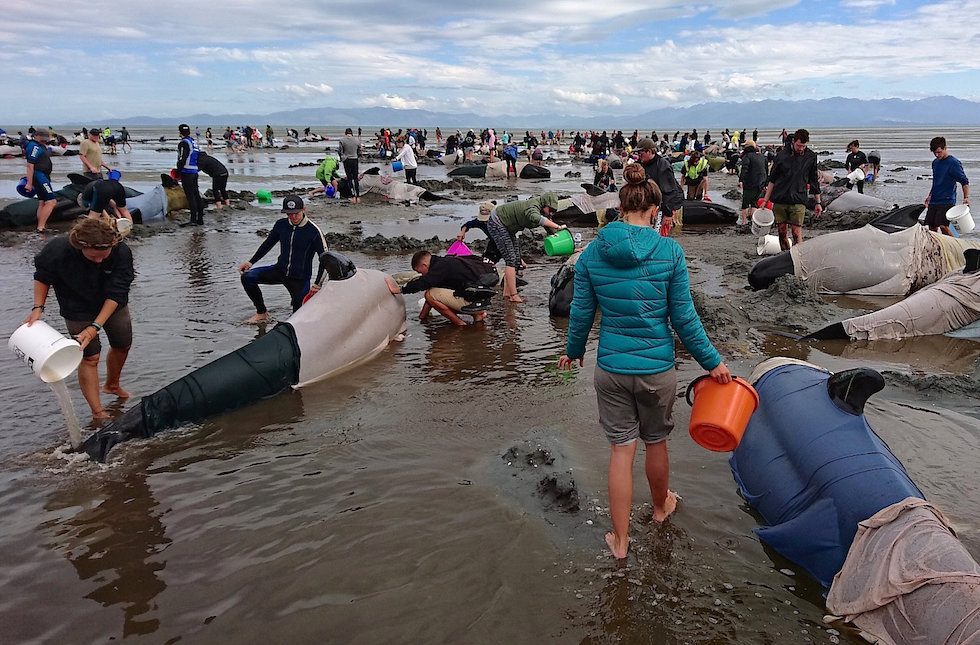 Well, just reported that in New Zealand about 200 pilot whales-pilot whales beached on the land in the district of Cape Farwell in the North of South island. All channels show as volunteers trying to save them, sprinkled with water and wrapped with wet rags.

When you do this the day before in the same area jumped about 400 grind. As reported, most of them, up to 300 individuals, was already dead.

Such cases are not the first in history. Why is this happening? 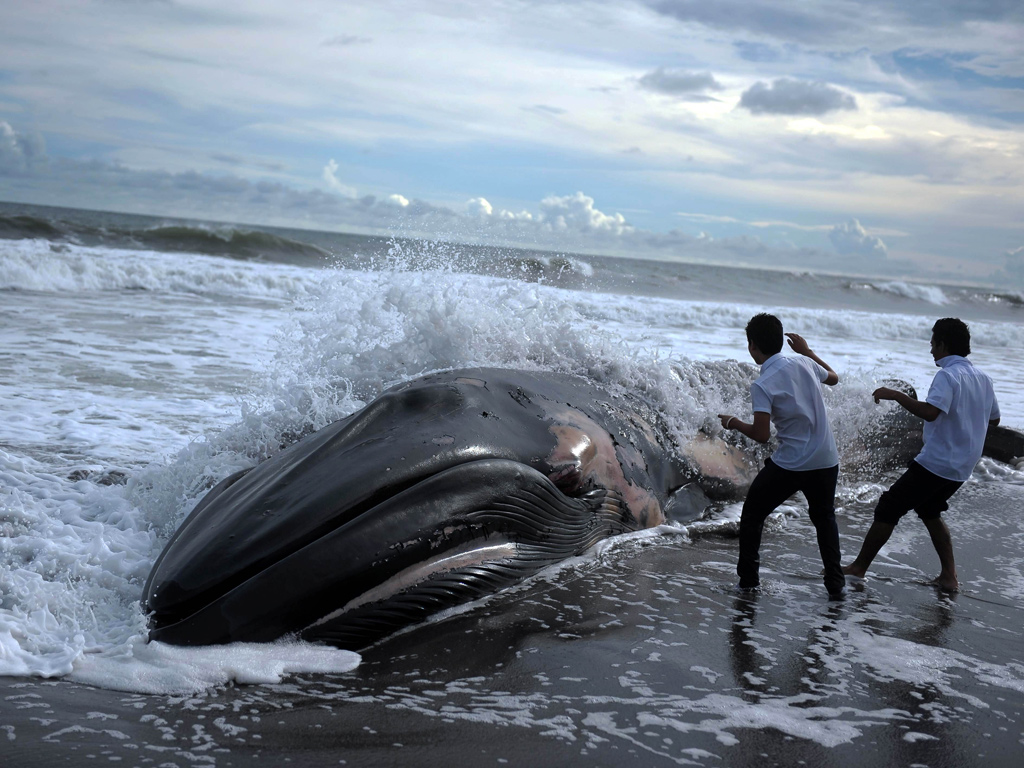 People found marine animals, which inexplicably was thrown on the shore, at least from the first century of our era, this is evidenced by the Roman and Greek documents. Today marine biologists presume to name the reasons only half of such incidents and the reasons for these different.

In 2002, on the shore of Cape cod Bay, beached whales 55. Thanks to the efforts of the American rescuers managed to save 46 animals. People doused with whale water and covered with wet towels, not allowing them to overheat. When the tide rose, the whale was dragged into the water. Alas, some of these marine animals tide did not wait.

In 2004, the area of the Canary archipelago to the shores of the two Islands jumped 15 whales. Only three of them managed to save.

In June 2005 on the coast of Australia jumped about 160 whales. Rescuers with the help of volunteers was not given a five-meter “fish” to die.

In October 2005, on the beaches of the island of Tasmania (Australia) 70 whales died.

In March 2007, on the shore of one of the Galapagos Islands jumped 12 whales. Despite the best efforts of rescuers, seven animals died. 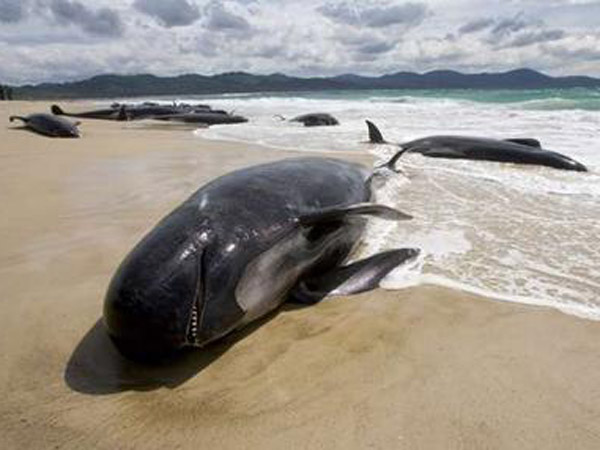 In 2012, at the Cape cod 177 common dolphins stranded and 124 have died, according to the Associated Press. The report also mentioned that in total the number of dolphins higher than the average of 37 animals, which was recorded in the previous 12 years.

More than 200 dead dolphins have washed up on the beaches of Chiclayo, Peru. In this case, found not only the dead dolphins, but dead fish – anchovies. Because this little fish is food for the dolphins, maybe they got sick because of these fish, but the cause of death of animals remains a mystery.

Why is this happening ?

Often this injury or illness. Has suffered from attacks of a predator, the animal may feel too weak to stay on the water, at some point it gives up and allows the waves to put yourself on the beach. In our case, the head of the marine program of world wildlife Fund Konstantin Zgurovsky suggested that cetaceans might be stunned by the seismic or underwater acoustic systems naval ships. According to experts, there are also assumptions about the infection of animals with worms or poisoning discharged into the ocean pollutants, such as heavy metals.

Climatic cycles could change the direction of movement of fish and other creatures that feed on dolphins. Dolphins chasing prey, could sail close to shore and disposed of on land. This makes sense when you consider that the dolphins were found stranded in Peru sardines and other fish. 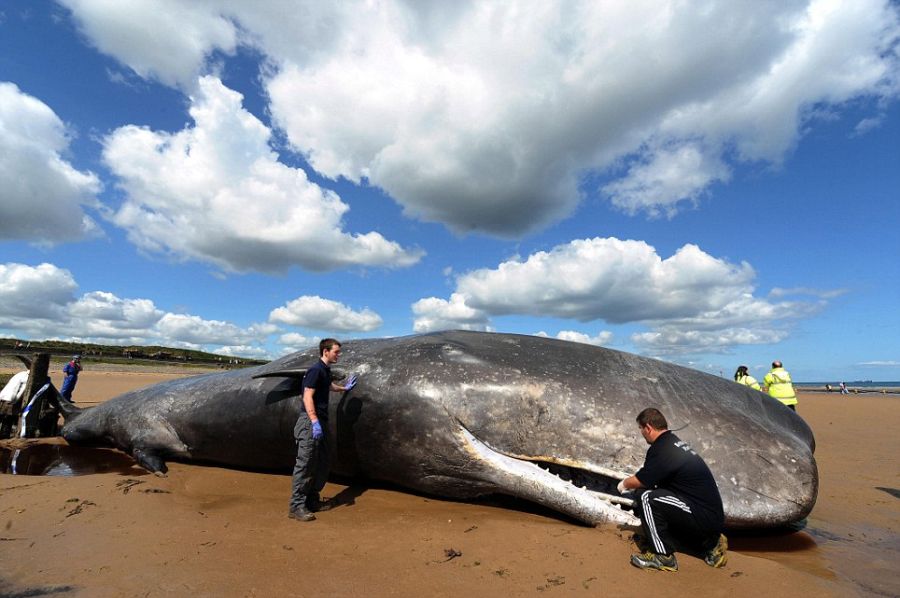 Much more puzzling given the chance, when thrown on shore a group of animals. One explanation offered by scientists is that the whales and dolphins that hunt and migrate in small herds, are victims of their own social structure. If the leader or dominant animal is thrown to the shore because of illness or injury, the remaining members of the group can follow him. The whales always come to the rescue of relatives from his pack. If one of the whales mistakenly wandered into the shallow water, he immediately begins to give signals relatives and those rush to the rescue. Alas, the whales, instead of trying to save a comrade, they themselves are in trouble.

Another version is that the herd swims too close to shore and not time to return at low tide.

In some cases, the mass suicide of marine animals do shortly after active use nearby military sonar equipment. In 2000 in the Bahamas, for example, 17 animals four different types (cleverely, toothed whales, dwarf minke whales and spotted dolphins) were found on the Bank 36 hours – daily applications of sonar and the next day.

Studies that after this incident, held the national administration on ocean and atmosphere, showed that the most probable cause was naval sonar device. Research data suggests that the sonars have an impact on the physical condition and behavior of marine animals.

Whales perfectly oriented in the ocean, so biologists say that in the brain they have a magnetic compass, making these sea creatures can use the Earth’s magnetic field. If whales occurs before the geomagnetic obstacle, their inner compass goes down, and they begin to sail the wrong way. It is known that the rescued whales often re-beaching. Perhaps this is due to the failure of the compass – the whales back into the water, but to navigate I can’t. 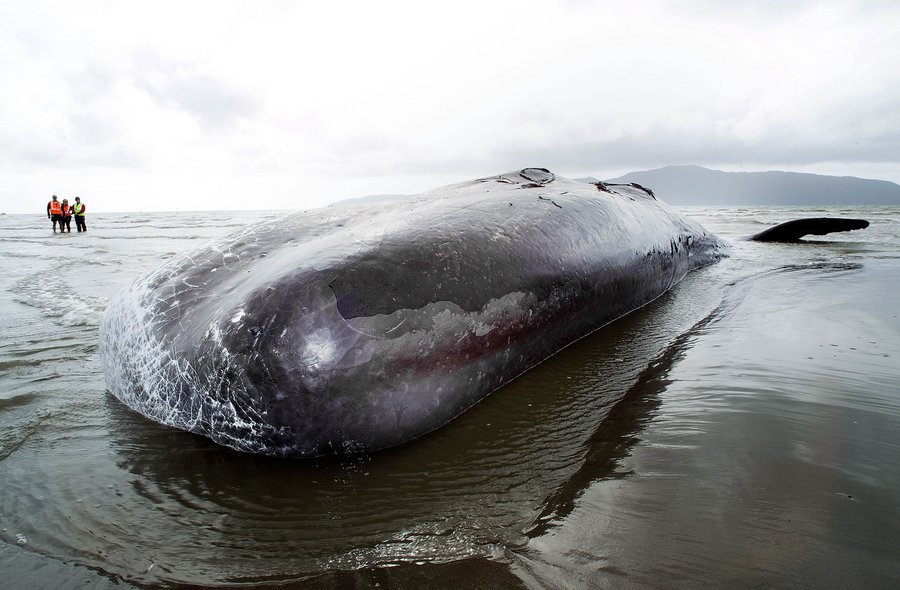 There is the theory of noise. This theory is most popular today. Scientists say that whales and dolphins are ruining the deafening roar of submarines. Losing hearing, whales cease to navigate and beaching. The research bodies of the beached animals gave grounds to assume that the cause of suicide is caisson disease (decompression sickness). This ailment occurs when there is a sharp decrease in external pressure. Caisson disease is called the disease of divers, pilots and workers in caissons (underwater working chambers).

Strong underwater noise frightens the whales, and they begin too quickly to go upstairs – there is a sharp decrease in external pressure. This provokes the emergence of whales the bends. Whales can scare fish finders, radars, sonars, missiles, submarines. This version is supported by the facts – there are several examples in which the release of whales occurred at the time of the implementation of military exercises using sonar.

It also happens that animals are thrown ashore deliberately hunting. Black killer whale, for example, often attacking pinnipeds, such as seals or sea lions in the surf zone or near the coast, where their victims are changing the transportation mode from swimming to walking and do it quite clumsily. While animal tries to get out of the water, the whale makes a leap and grabs the prey. After this it is either to wait for the right wave, or try to return to the ocean, wriggling all over.

Here is a video of one such hunt:

But 30 dolphins beached on the shore:

Anyway, consensus scientists have not yet come.