Winter Canadian River in a photo from space 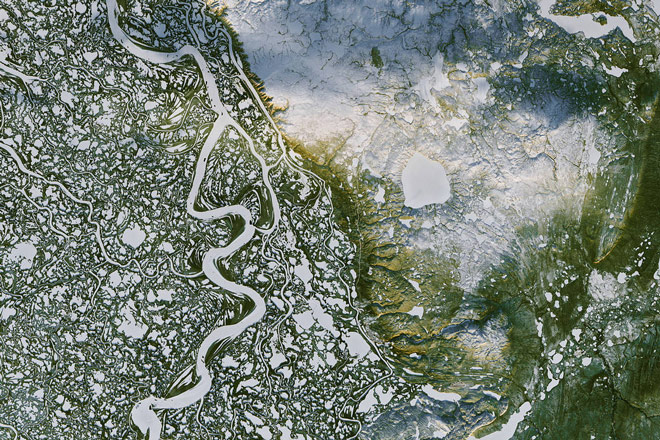 In the submitted picture of November 7, 2016, you can see a part of the Mackenzie Delta in Canada and the city of Inuvik, home to more than 3,000 people. The image was obtained using the Operational Land Imager (OLI) of the US satellite LandSat-8.

If your vehicle weighs less than 10 tons, you can drive through the frozen water to Ryndir Station.

The white road, 194 km long, lies between the remote settlements of Inuvik and Taktoyaktuk along the Eastern Canal. Covered with snow and ice, waterways stand out among the surrounding lands, where the pine forest grows green. Sun rays from the horizon illuminate the elevations, giving them a golden color.

The Mackenzie River system is Canada’s largest basin and the tenth largest reservoir in the world. It extends to 4200 km from the icefield of Columbia Icefield in the Canadian Rockies to the Arctic Ocean.

Floods on the river are replenished by the nearest lakes. The map of the 1950s indicates that its terrain has not changed much since then. However, some sites are located on permafrost, which makes it vulnerable to global warming.

The surrounding lands with ponds and lakes are home to deer, waterfowl and various species of fish. Every year, several thousand reindeers travel around this area, heading for breeding sites.