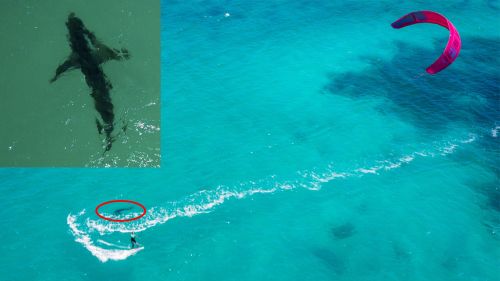 About the terrible meeting said 30-year-old Isabelle Fabre (Fabre Isabelle), a leading travel blog. Woman sent to different corners of the Earth, where he is engaged in active sports, photography and video.

Kitesurfing in Australia almost ended for it tragically: at some point, Isabel noticed beside him a dark silhouette, but decided that it was a Dolphin, and continued to enjoy skating on the Board. Only after a six-foot shark ducked beneath the Board, the woman realized the degree of danger.

At the same time the shark noticed her friend, who ran from the drone. He began to call Isabel on the shore, and the woman at this moment, according to her, “flashed before my eyes all life.”

Fortunately, the good skills of the surfer helped her to cope with the problem, but once he was safe, it was in a state of stress. As antistress therapy Isabel during the next days made several extreme activities: climbed the 65-foot tree and swam with the sea lions.

White shark (Carcharodon carcharias), also referred to as a man-eating shark. This definition is not entirely accurate: white sharks don’t eat people, and a huge number of serious injuries and deaths as a result of the meetings was a desire for predatory fish to identify the object. Its jagged sharp teeth they bite all of the floating items that fall in their way, including surf boards or floats. For the period from 1990 to 2011, white shark inflicted injuries 139 people, 29 of them died.