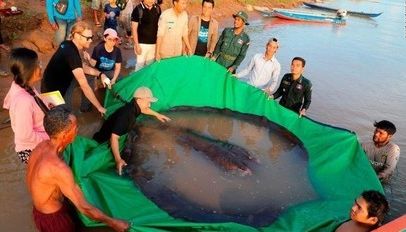 Residents of a Cambodian village on the Mekong River caught what researchers say is the world’s largest freshwater fish ever recorded, a stingray that weighed 661 pounds (about 300 kilograms) and it took about a dozen people to haul it ashore. CNN writes about it.

Named Borami, meaning “full moon” in Khmer, because of her convex shape, the four-meter-high female was released back into the river after being electronically tagged so scientists could monitor her movement and behavior. .

“This is very exciting news because it was the largest (freshwater) fish in the world,” said biologist Zeb Hogan, former host of the National Geographic Channel’s Monster Fish and now a conservator for the Wonders of the Mekong conservation project.

Borami was caught last week off Koh Preah, an island in the northern Cambodian section of the river. Previously, the largest fish was considered a catfish weighing 293 kg, which was caught in northern Thailand in 2005.

According to the River Commission, the Mekong has the world’s third-largest fish population, although overfishing, pollution, and salt water intrusion have led to a drastic decline in species.

According to Wonders of the Mekong, stingrays in particular were vulnerable due to these changes.