Biden’s ‘victory’ speech: Was Joe even there? 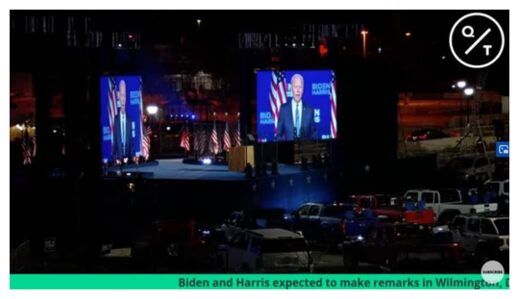 This is what I saw Friday night.

I was watching the “Bloomberg QuickTake: Now” live feed of the Wilmington, Delaware, outdoor space. Long shot. Vehicles parked. Occasional sounds of horns honking. At the front of the space, lit up in the darkness, an empty stage. Flags. A podium.

The Bloomberg crew appeared to be waiting for Biden to walk out on that stage and deliver his speech. Why else would they set up their cameras and hold on that long shot for minutes?

I assumed Biden was late. So I kept watching that shot of the space, the cars, the stage.

Suddenly, two big screens on either side of the stage lit up. Biden was there, on screen, standing at an INDOOR podium, against a plain background. He started talking.

I clicked on the TV set. I flipped through network channels. Yes, there was Biden, indoors, against that plain background, at that podium, talking. Delivering his speech.

Except, where was he exactly? And when? Was this a live speech, or had it been pre-recorded?

Was this a backup recording, made just in case Biden, disabled, couldn’t walk on to the outdoor stage and deliver his message?

If this indoor speech had been the plan all along, and it was live, why had that Bloomberg crew been set up outside for many minutes, showing viewers the long shot of the empty outdoor stage?

At the end of the speech, Biden walked away from the podium among security people and what appeared to be a few reporters. There was the sound of applause — but no shots of the indoor audience.

Network news people must have been aware of what certainly seemed like a last-minute switcheroo, in the venue. But of course, they have said nothing about it.

Maybe there is another explanation for what I’m reporting here; but until I hear it, it seems there was a deception Friday night. The deception wouldn’t mean much if we were talking about a local Chamber of Commerce event. But this is the presidency of the US, and a candidate, a man who suffered a serious brain aneurysm and an even more serious pulmonary embolism in 1988, and has experienced a major decline in cognitive/motor abilities.

If Biden is eventually installed as president, is this what we can expect during his term in office, as long as it lasts? Canned, pre-recorded, edited messages to the nation?