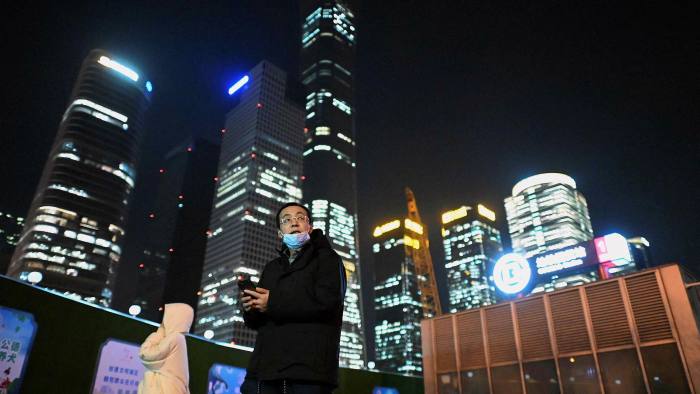 In macroeconomics, there’s a rather tired old saying: “Demographics is destiny.”

The idea is simple. If your workforce can count on the young, the marginalised or immigrants joining in greater number than those leaving it, your economy is in a pretty sweet spot. Consumption, investment and tax revenue should naturally edge higher. Think of the UK in the 1980s, when women began entering the workforce at an accelerated pace. Or the USA’s long-lasting ability, up until recently at least, to attract people from all over the world.

Conversely, an ageing population is a major drag. Not only as your workforce is shrinking, weighing on growth, but as those retirees need their care and pensions funded by a smaller and smaller pot of taxes. Japan, whose population has been in decline since 2007, is the most notable example of this.

Well, up until now at least, according to Jefferies. Because its analysts reckon China’s population is, like a cashmere jumper in a hot wash, set to shrink. And, crucially, faster than many think.

From a note published by Simon Powell today:

The sharp decline in births drags natural population growth to negative. Historically, negative natural population growth occurred once in the 1960s during the Great Famine, when deaths exceeded births by 3 million p.a. If births decline by 20% p.a. from 2020 onwards, deaths will surpass births by about 6 million in 2025. We estimate China’s population will peak in 2022, which is almost 10 years earlier than the United Nation estimates.

And the accompanying chart: 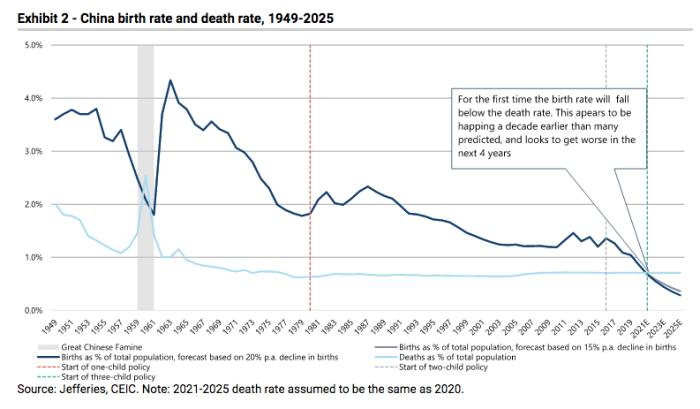 The signs of how this is going to influence the economy are there. This Monday the FT reported that nappy producers are to start prioritising its older customers rather than children. Meanwhile, private equity (who else?), have shown a growing interest in burial plot and funeral providers.

We don’t want to get ahead of ourselves, but it’s all beginning to feel a little like Japan in 1989 isn’t it? A rapidly deflating property bubble fuelled by debt. Tick. Stocks massively underperforming foreign counterparts. Tick. And now, potentially, a population materially declining in size. Tick. Arguably, the only thing missing is a legion of highly profitable businesses — Toyota, Sony, Honda, Nintendo — beginning to accrue excess savings at the expense of its workers.

At this pace, we wouldn’t be surprised if the People’s Bank of China begins cutting rates much faster than the Bank of Japan did in the 1990s. Macro bears have long expected Western economies to get trapped into Japanification. China might beat them to the punch.